“I’m a student before I’m an athlete.”

Kaitlin Guevara is a three-sport athlete at Carrizozo High School competing in volleyball, basketball and track.  She grew up in the small southern town with a competitive spirit.

In track, she competes in the 100-meter race, the 200m event, as well as the 4x100m and 4x200m relays. Individually she finished second in the 100m and third in the 200m this past May, but her goal is to stand on top of the podium this season. Kaitlin describes herself as getting a “slow start out of the blocks, but builds up speed quickly”.  Her attitude in the classroom is a full-speed ahead pace.  Kaitlin finished last year with a 4.0 grade point average.

When it comes to mottos or inspirational messages, the junior only has one in mind. “I’m a student before I’m an athlete,” she said.  “That’s all I’ve really gone by.”

Kaitlin comes from a family of athletics.  “My dad played basketball and football and my mom played basketball,” she said.  “I’ve always done sports since I was younger.” She is the middle child of the family with an older brother who graduated from Carrizozo High School last year as well as a sister that is a year younger than her.

It didn’t take long for Kaitlin to help the Grizzlies reach the postseason in one of the sports she participates in.  Her eighth-grade year, she went to state in volleyball and got a taste of what it’s like to get so close to the ultimate prize.  “There were a lot of people and balls flying all over the place, it was intimidating,” she described.  She hopes to lead her team back to the postseason this fall.

Kaitlin says she might go into the medical field when she graduates high school.  “I kind of want to do nursing, I like helping people,” she said.  “I worked at the daycare for a little bit this past summer.” Until that time, her priority is getting good grades.  Whether it’s setting the volleyball, running the point in basketball or sprinting down the track, Kaitlin always puts her studies before any sport.  That’s a message all student-athletes should strive to follow. 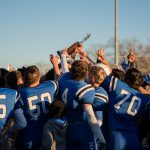 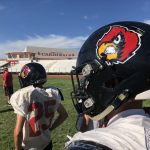