New Mexico Activities Association Executive Director Sally Marquez answers questions about the return to athletics and activities for the 2020-2021 school year. Here is this week’s interview.

The state basketball tournament takes place this week.  It was a little different with a smaller bracket of eight teams.  How did the seeding and selection process go?

The seeding and selection process is correct.  We did what the schools voted on and that is that the district champions automatically qualified and we use the six criteria points.  People forget that we are in a pandemic.  What we had to do within the governor’s health order is schools has to play within their region and they had to play within their district.  There were not many games outside of district, or outside of the region, that would influence MaxPreps and your opponents opponent.  MaxPreps does their rankings based on who you play and who your opponents play.  When a school plays within their region, MaxPreps may be a little bit off this year when it comes to determining who are the best teams.  We’ve said there’s a chance the top 8 schools might not make the tournament.  We did not have many at-large bids.  Because of the automatic berths, we had maybe one at-large or two at-large teams.  So there are some very deserving schools that should have made the eight-team bracket, but they didn’t because the district champions automatically qualified.  There are some criticisms that this one shouldn’t have been a one seed or this one shouldn’t have been a five, but we need to go back and remember that we have a culminating event and we are playing.  Back in January, we kept saying ‘We will play again New Mexico’, and we have been saying that it is not ideal but we are playing and having a culminating event.  I know some communities are upset about where they are seeded or that they did not make the bracket, but overall, the goal that we are playing every sport in the 2020-2021 school year is happening and we need to look back on the fact it was a good season and a lot of kids were able to play basketball this year.  We are going to have a great week of basketball and look back and remember what this was all about.

With the announcement last week about county color, will there be fans?

It depends where the game is and what the color of the county is.  For a majority of our games, yes, we will be able to have fans in the quarterfinals and semifinals.  For the finals at the Pit, we will wait to see what color Bernalillo County is.  Right now Bernalillo County is green, so we would be able to have 25% capacity in the Pit.  So, to answer your question, it depends where the game is being played, but I do believe all the quarterfinal games will be able to have spectators for their events.

If Bernalillo County is green or turquoise and fans are allowed at the Pit, what will be different?  Will the fans be cleared out after games?

We learned a lot in cross country.  That was our first event and we decided to have sessions where we had the 4A boys followed by the 4A girls and then we had the 3A boys and the 3A girls, but we cleared out the spectators in between so we could bring new spectators in for the next session.  We are going to do the same thing in basketball.  We usually do not have sessions but we are going to go back to where a spectator can buy a ticket and they can see two ballgames in that classification.  We will have a break where we are going to clear out the Pit and then a new set of spectators can come in.  That allows that the parents for every game and the community members are able to see their teams.  It is a little bit different, but we will have two games on Thursday, four games on Friday, four games on Saturday so we can maximize the number of spectators in the Pit.

Will there be concessions?

Under the governor’s COVID Safe Practices, there are no concessions.  So when you go to a basketball game for the quarterfinals, semifinals, and even the finals at the Pit, there will be no concessions at any site.

If spectators are allowed at limited capacity, how can fans get tickets?

Whoever is hosting the game for the quarterfinals and semifinals are the ones that are selling the tickets.  So fans need to contact that school/site to find out if they are doing it online, how many tickets are being sold, what is the capacity.  Any of those questions, the host site school will have those answers.  As far as the finals at the Pit, UNM is selling tickets online and there is going to be a limited capacity of only 3200, which is 25% of the Pit.  You can buy them online.  However, I do want to emphasize that the teams making the finals, we will have some tickets held back for those parents and those communities.  So we will make sure that all the communities that make the finals have tickets.

State spirit is the following week.  What will be different about cheer and dance this year?

The main difference is we are not going to have it over a two-day period.  The COVID Safe Practices from the governor says there is no overnight stay.  Cheer will be on Friday May 14th and they will do two routines on that day and then dance will be on Saturday May 15th and they will do two routines.  From the time when the cheerleaders or dancers go on the Pit floor to the time they perform, rest, change clothes, and perform again, it will be about an hour-and-a-half period.

We also have state swimming and diving coming up soon.  Will there be fans?

Unfortunately in swimming in dividing because the facilities are smaller and staying under 25% capacity or 33% capacity, we are not able to have spectators in the facility during competition.  We are separating genders.  On Thursday we are doing girls and on Saturday we are doing boys to make sure we don’t have the massive amount of athletes in there at one time.  Even with the separation of genders, we are not able to have spectators in order to meet the guidelines set forth by the governor’s office.

Lastly, what is the most important thing fans need to know for this week’s state basketball tournament?

First and foremost, we need to remember that we are playing.  We are having a culminating event and if your team didn’t make the top 8, those kids were able to play a season this year and we didn’t know if that was going to happen.  What we need to focus in on is to enjoy the moment.  We need to cheer on those athletes that are playing this week, but also remember that athletes were able to play the last six weeks.  We have done something incredible by having a season and that needs to be the focus.  We started a season, we are finishing a season, we are playing spring sports, we have swimming and diving, wrestling and spirit.  I can say ‘We are playing again New Mexico, but we are reaching the goal that every single sport in the 2020-2021 school year is going to be able to play. 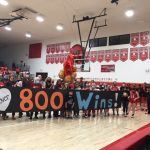 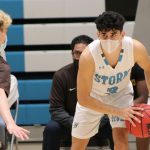