Goddard (5-0-1) at
Santa Teresa (6-0)
The Warriors are 6-0 for the first time in school history, but they face their toughest opponent on the schedule so far.  The Rockets have beaten St. Pius X, Deming, Portales, Los Lunas and Lovington. “Goddard is really good,” said Santa Teresa head coach Shae Vierra.  “They’re the best coached team we’ve seen.  They play hard and give great effort and that’s where we’re going to have to match it.”

Kirtland Central (3-3) at
Moriarty (3-3)
The Broncos are trending upward.  They upset Piedra Vista last month and followed that with a 50-0 win over Thoreau and a 40-14 victory at Farmington.  Keep in mind, 22 of their 40 points were directly or indirectly from defense and special teams.  “We’ve improved, but still have a long way to go, especially on offense,” said Kirtland head coach Greg Jenks.  “We’re really young and we’re improving weekly,” said Moriarty coach Joe Anaya.

La Cueva (7-0) vs
Eldorado (5-1)
This rivalry game is one of the better matchups every year, regardless of record.  “I think rivalry weeks are one of the most exciting part of athletics,” said La Cueva head coach Brandon Back.  “These games have very little to do with who’s injured or not. These games are about emotion, excitement and execution.  Having coached with and against coach Dotson, I’m fully confident that his team will be ready to play.”
The Eagles are coming off a bye week while the Bears pulled out a 4thquarter win over Manzano last week.  Nick Petty will fill in at quarterback once again for Eldorado.  “It’s going to be tough starting a sophomore quarterback with the La Cueva defense,” said Eagles head coach Charlie Dotson.

Mayfield (4-2) vs
Centennial (7-0)
The Hawks remained perfect with a win over Las Cruces last week.  Can they do the same against another in-city rival?  Mayfield had a bye last week and won three of their last four games.

Piedra Vista (4-2) at
Roswell (5-1)
Roswell is one of the top two teams in Class 5A right now.  Jared Howell’s Panther team has put up 71 points in their last two games. 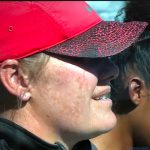 “We want it. We’re hungry. We’re coming to get it.”General News, Press Releases