“We want it, we’re hungry, we’re coming to get it,” said junior Dalis Bruce.

She’s talking about the blue trophy, the one awarded to the state champ at the end of the season. The Hawks feel like they have a good shot at it next month.

“It’s probably one of my most talented bunch,” said head coach Samantha Lucero.  “Every practice they come ready to play.  They’re focused and I think they can really do it if they keep playing the way they’re playing.”

Lucero is in her 12thyear as head coach at Volcano Vista and this season she decided to shake things up a little.  “I’ve changed the program up a little bit, we have everybody practicing together with all four coaches and every week you’re fighting for a varsity position.  I think it keeps everybody hungry, I think it keeps people less complacent and I think it’s worked out really well.”

“We’ve always thought we’re a talented group since freshman year, but this year you can see our passion and the love for the game and every single person,” explained senior Cierra Ramirez.  “Everyone is fighting for a spot but working together all at once and it makes everything so much more intense.”

“Anything that doesn’t work we sit down at halftime and say ‘hey we need to change this’ or ‘we need to do this differently’ and then we do it and it’s just like magic is on the field,” Bruce said.

2010 was the last time Volcano Vista won the state title.  Could this be the year the Hawks lift the blue trophy once again?

“I do believe so,” Bruce said with confidence.  “I’ve been here for three years and I feel like this is the year.”

“Our best competition is going to be ourselves because if we want it we can get it, but we have to push ourselves,” added Ramirez.

“I think if we come focused, ready to go, I think we have the ability to win that blue trophy,” said their head coach. “I just think we have to come ready, prepared and focused.”

The Hawks have a tough district game with Cibola on Wednesday. 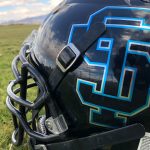