The guidelines to begin summer workouts was released last week.  I’m sure you’ve gotten all sorts of questions.  Let’s go through some of them that have come up.  The ratio is one coach to a POD of five kids. Are coaches are allowed to work with more than 1 POD?  For example, can they have a pod of 3 on Tuesday and a different pod of 3 on Wednesday?  Or could we have different pods at different times?

The POD ratio is 1 to 5, so coaches can be with multiple PODS but they cannot be with multiple PODS at the same time. For example, a coach can have a POD from 9:00-10:00 and then those five kids leave and another five come in and he can with that POD of five.  We just cannot have a coach that has five kids over here and five kids over there and that coach going back and forth or rotating PODS at the same time.

What about the number of PODs in gyms with a mezzanine? Is it OK to have two PODS or groups of five on the main floor and another POD on one mezzanine and a fourth one on the other mezzanine?

These are guidelines and every facility is different.  Within the POD the kids need to be six feet apart and the PODS need to have distance from one to the other.  The coaches need to look at their gyms to see what they can manage within those guidelines.   If it’s a large gym with a mezzanine, you could probably have three PODS in the large gym area and then you could have one POD on one side of the mezzanine and one on the other.  However, if you have multiple PODS one thing you need to remember is there has to be one coach for every POD. In the example you just gave, if there is three on the court and one in the mezzanine and another one on the mezzanine, you need to make sure you have five coaches to monitor those five kids in each POD.  Why does it have to be one coach per POD? It’s because of safety to make sure these kids stay six feet apart and doing what they’re supposed to be doing.

Do we need to have a coach with each group?  What if you have one coach to direct all the athletes that are in their groups of 5 and no cross grouping or interaction with the coach.  Just direction.  Like In cross country.  Many cross country coaches don’t run with the kids. So as long as they keep 6 feet apart can we have 5 athletes run in one direction and 5 runners run in a different direction even if they don’t have a coach with them.

I would say yes, but where they need to be careful is we cannot have kids congregating at one time.  If you are a cross country coach and you have one group of five that are going to go one direction and another group of five that are going to go another direction, at some point you’re going to have one coach with ten kids together. We cannot have that happen.  For cross country, I suggest you stagger those starts.  One comes at 8 o’clock in the morning, for example, and then the other five come at 8:15 and run in the other direction.  You just need to make sure kids are not congregating together.

What about kids doing multiple sports? Can they be allowed in a different POD or are they limited to one sport?

We always encourage multiple sports.  What I suggest is the coaches need to work together within their school.  Is football going to be in the morning and basketball going to go in the afternoon because of the heat?  A kid can go with one POD with football in the morning and another POD for basketball in the afternoon.  The reason for these PODS is so that if somebody does get COVID-19 we know who was with that kid at all times. So, we need to make sure we do the monitoring form so we know every single day who these kids have been in contact with.

There are guidelines about cleaning and sanitizing workout areas. What is considered an “adequate cleaning schedule” for an outdoor facility, namely a baseball/football field, and would such guidance vary based up whether the field is turf or natural grass?

I’m not ready to answer that question yet.  What I will do is seek information from the national federation this week and next week on our Q&A we can bring that question back and I’ll. Be able to have answers.

Each coach must have a COVID-19 Test before working with the athletes. Are there guidelines for how close in proximity our test must be completed to June 15th? If a coach were to get tested this week, would those results be valid to begin working with our athletes?

I just received some guidance on that.  The guidance I was given was 72 hours, that is what child care and youth sports have to follow. So, if someone had a test in April they are going to need to take it again.  If we are starting on June 15th, it needs to be within 72 hours of June 15th.

In the Q&A, I stated that the Covid-19 test must be within 72 hours of the start date.  That was the original directive from the Governor’s office and PED.  Since then and listening to your concerns, I asked if I could move that date for at least 7 days prior to the start date.  They responded that it is fine if a coach gets a test as close to the start date as possible with allowing the time it takes to get results in your area into consideration.

Do the athletes/and their guardians need to sign any sort of waiver form in order for them to participate in phase 1?

We do not have one, but that is local autonomy.  These are guidelines.  I know there are some school districts that do want a form that the parents are signing.  It is not mandatory and these are the guidelines we are going to work under.  It’s not a bad idea.  I would say any signature and guidance to parents is good so they know what’s going on.  We don’t want parents to come and they’re not understanding what environment their kids are going to be in.  It is a very good decision, but that would be a school’s decision.

Another question that has come up is can a coach take their players to a club tournament outside the state?

At this point we are saying no.  There is no travel with these kids.  Everything must be within their school district on their school campus.  Maybe those guidelines will open up.  I will continue to work with the Governor’s Office, but at this point our education based coaches are not allowed to take those kids to a tournament or to camps.

The Governor announced gyms can open up in limited capacity.  So, if public gyms are at 50%, why can’t high school athletes use their weightrooms?

I’m going to work through that.  We gave those guidelines last week and June 15th is still two weeks away and who knows what might change.  I will continue to work at it.  Maybe we can have the weightrooms at 50%.  I’m very hopeful and I think we can.  The businesses that are open at 50% have all these sanitation guidelines.  Are schools ready for the guidelines that are going to come their way to make sure the weight equipment is wiped down and the benches and the floors and how to sanitize that area?  I think if we do go to the weightroom to 50% in two weeks coaches need to start thinking about the sanitation that comes with it.  Does that mean the custodial staff comes in every day?  That’s all a school district decision.  Those are concerns that take place if we do allow weightrooms at 50% capacity.

What if someone tests positive for COVID-19?  What happens to the rest of the group?

The guidelines say wait and you will hear from the Department of Health.  With what they are putting together in the Governor’s Office, If somebody tests positive they are hiring people to make sure they figure who that kid has been in contact with and give direction.  Now we are talking about the school and the coach.  They will be giving direction as to what to do next in those situations.

It seems like such a long time ago when the state basketball tournament was completed without fans.  We’ve come a long way and still have a long way to go.  Where are we at right now?  How do you see the progression and where we’re headed?

I’ll never forget that day, March 11th when I was up at the top of the ramp and being told that we were going to have state basketball without fans.  It was a hard day.  Nobody totally understood the situation.  Nobody understood the gravity of COVID-19 at time.  Now, three months later, they understand we really pulled something off.  We pulled off b eing able to finish that basketball tournament when nobody around the country was playing, we were standing tall.  Two weeks later were told school was going to be cancelled and spring sports were going to be cancelled, that was gut-wrenching and so hard to come in front of the public and say we’re not having spring sports.  I know there’s a lot of opinions that we are coming back too fast, too slow, some people want to go quicker, some people want to slow down, everybody has an opinion.  One thing I am saying is we are going to start.  We do have something positive going on.  Every time before I was saying we are shutting down, we’re not playing, we’re not doing this or that.  Right now, it’s a new beginning and we are going to start and I am excited about that.  There are still a lot of questions that need to be answered.  We have two weeks and I promise I’ll answer ever one of those questions.  We are going to start playing.  We have to stay positive and we will play again New Mexico.

Here is the interview with Sally Marquez immediately following the Board of Directors meeting on May 28, 2020. 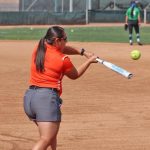 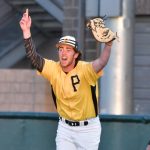 THE FINAL HIT OF HIS HIGH SCHOOL CAREER TURNED OUT TO BE A MEMORABLE ONEGeneral News, Press Releases