And she’s had a lot of brands on her jerseys.  She grew up in Lubbock with stops in New Mexico (7th and 8th grade), Colorado (9th and 10th grade) and back to the Land of Enchantment for her junior and senior seasons.

“I went to a basketball camp this past summer and one of their big topics was ‘Ride for the Brand’,” she recalled.  “That’s what Tatum commands you to do is Ride for the Brand, whether you’re wearing a volleyball jersey or a basketball jersey you have to represent the name on the jersey.  That’s what helped me through all the moves.  You are who you’re wearing right now.”

Ashlyn played volleyball and basketball for the Coyotes this year, quite the difference from her background in ballet.  “The first time I participated in volleyball was seventh grade, before that all I played was ballet,” she said. “I never played sports and then we moved here to Tatum and I decided that year I would try out for volleyball.  I didn’t think I would like it that much and I love it now!”

However, Ashlyn made it clear dancing was in the rearview mirror.  “I don’t miss ballet at all, I love sports,” she said.  “I’m so competitive.”

Believe it or not, there are similarities between ballet and volleyball.  “The physical requirements are very similar.  There’s a lot of conditioning, jumping, leaping.  You have to know where you’re at all the time, know where you’re supposed to be and your position.”

Ashlyn is the type of student-athlete who maximizes her production despite any physical limitations.  “One thing I’ve found out is that I’ve never been the best athlete on the court,” she said.  “I’ve never been naturally the fastest or naturally the strongest, but one thing I’ve noticed is I can always be the hardest worker on the court, whether that’s in the weight room or after practice shooting.”

Her workmanlike approach to competing is rooted in her family. “I have three older brothers who were collegiate level athletes,” she said.  “They are competitors in everyday life and when they played high school sports.  That’s really what drives me to compete and drives me to be the best.  I want my older brothers to say, ‘She’s doing good’, because they did really well in high school.”

On top of her athletic participation, Ashlyn also was a part of the Young Horse Development Program for the American Quarter Horse Association in 2019.  “It’s a very competitive industry,” she explained.  “I went to a show in Amarillo and showed this filly and the halter was a little too big for her.  It hung just off her nose a little bit. A judge came over and told me how to fix that and where to buy a new halter.  That’s what I love about that industry.  Everybody works hard all day and helps each other out.”

Ashlyn has her eye on attending college at West Texas A&M University after her senior year. “Animal science is really appealing to me right now,” she said. “I’m also looking into dentistry.”

“After high school I want to be successful, I want to be independent and I want to make a name for myself,” she said.  Ride for the Brand.  Sounds like the brand Ashlyn will be riding for in the future will be a winning one. 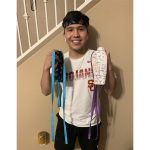 IN A TIME OF NEED, ISIAH CHARLES STEPS UP FOR THE FOUR CORNERSGeneral News, Press Releases 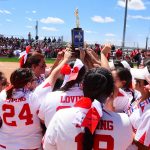