IN A TIME OF NEED, ISIAH CHARLES STEPS UP FOR THE FOUR CORNERS

In times of need, Isiah Charles steps up to answer the call whether it’s in basketball or in life.

Isiah was the team captain on the Farmington boys basketball team this past season.  “He was an undersized, senior point guard,” is how head coach Larry Don Chitty described his player.  “He played and practiced with more effort and determination than anyone on our team.  He was our leader and our heart.” Despite Isiah’s small 5-foot-5-inch frame, his act of kindness looms large.  His compassion for the Four Corners community amid the COVID-19 outbreak is a lesson others should follow. 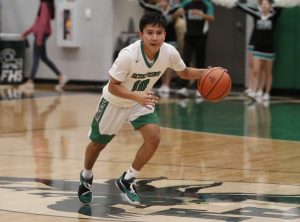 “My aunt works at the medical facility in Shiprock and I overheard a conversation about the shortage of masks,” Isiah said.  Despite not even knowing how to sew, the high school senior decided to take it upon himself to make more masks and donate them to the Northern Navajo Medical Center in Shiprock.  “At first, I was just going to make one for my aunt, but then I heard the entire hospital didn’t have as many as they needed so I decided to make more.”

There was one problem with his plan, Isiah didn’t know how to sew. 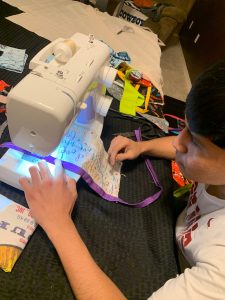 “My aunt and mom had to teach me how to sew,” he explained.  “They showed me how and we decided to do it as a family.  When they got tired, I stayed up late at night continuing to sew them.”

Isiah says he is making anywhere between 20-30 masks a day.  “I’ll probably run out of material soon,” he said.  One thing he won’t run out of is time.  “I don’t have much else to do right now,” said the senior who cannot attend in-person classes because of the COVID-19 restrictions.  Charles says even though he, like many, is missing out on annual events like prom, graduation and many other senior memories, he still maintains a positive attitude.  “I don’t let it get to me,” he said.  “This is a serious situation and I understand what’s going on and what’s important, so I’m not so upset about it.”

Ultimately, he hopes his actions are an example for others to follow.  “Be generous and think of other people,” he said.  “Even the smallest thing you do can have a big impact.” 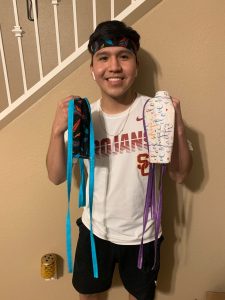 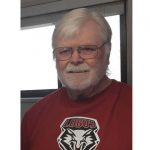 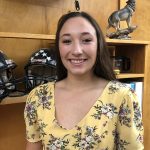