The state of New Mexico has several high school athletes who will play at the next level, but Santa Fe High School junior JB White is one of the state’s highest rated basketball recruits in years.  On Tuesday, he announced his college choice and posted on social media that he wants to attend the University of New Mexico and play for head coach Paul Weir.  White is a 6’7″ junior guard who is ranked as the 64th top recruit in the country according to 247Sports.com.

“I just want to start off by saying thank you to all the people who have played a major role in my life and have helped me with my game.  I also want to thank all the coaches who have takent time to recruit me.  After talking with my family I have come to the decision that I want to attend college at the University of New Mexico.”

White said he chose UNM because “that’s the first school that offered me and the only school who stayed in touch when I got hurt.”  White also said “Coach (Paul) Weir was really there for me and, through it all, trying to get me back to where I am now.”  White missed most of last year after suffering a knee injury early in the season.

White had several schools interested in him and ultimately chose the Lobos over Santa Clara.  He says making the decision is a huge weight lifted off his shoulders.  “I have been thinking about it for the past couple weeks and the recruiting process was super stressful on me.” 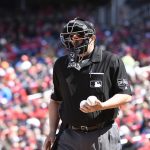