Back in February, Ealey won shot put at the Toyota USA Track and Field Indoor Championships in New York City.

In high school, Ealey was a state champion in the shot put and javelin her junior and senior years.  She also won the Class 4A 100m race four years in a row, as well as running a leg for the 4x100m relay state championship squad for three straight years.  Ealey helped Los Alamos win three straight state team championships.  She was the high-point female athlete at the 2011 state meet.  Ealey has the second longest throw in the shot (of any class) in state history at 47’3″.

After graduating from LAHS, Ealey went on to compete for Oklahoma State.  She left OSU in 2016 as the most accomplished thrower in school history.  She was a school-record holder in the shot put and javelin.  In 2016, she competed in the Olympic Trials. 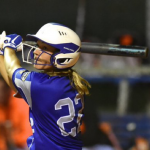