When Dominic Lopez blows out the candles on his birthday cake on January 3rd, the high school junior will probably wish for another blessed year.  He’s already lived longer than some people expected.  When he was 9 years old, Dominic spent over a month in a coma.

“I had real bad asthma as a child,” Dominic explained.  Back in 2010, a week before Christmas, Dominic was taken to the hospital to fight a case of pneumonia.  The doctors wanted to keep him overnight because his oxygen levels were low.  “They gave me some nebulizers, an IV, as well as medications to help with my bronchitis,” he described.  Dominic says all the medications he was on caused him to hallucinate, so they decided to sedate him to settle him down.  “You’re not supposed to sedate an asthmatic child,” said Lopez.  The reaction put him into a coma.  He missed his 10thbirthday as he remained in a coma into the month of February.

Once he came out of the coma and was stabilized, the recovery process would begin.

Dominic couldn’t stand on his own.  He was weak. He didn’t have any balance.  “I was riding a tricycle for about a month.” Through lots of physical therapy and rehab, he would get stronger and develop more muscle.

During rehab, a nurse Bobby asked him, “Do you want to get back to where you were?  Then it’s all up to you.”  Dominic accepted the challenge and was pushed to his limits.  “They said I wasn’t going to be able to compete again and I would be paralyzed from the waist down.”  Dominic proved them wrong.

This past fall, Dominic ran cross country and qualified for the state meet.  This winter he competes on the Penasco High School boys basketball team and in the spring he plans to play baseball with the Panthers.

Dominic has not only had to bounce back physically, but he’s also recovered from the loss of his father.  His dad, Jose, died when Dominic was young, before he went into his coma.  “He was my coach, when I was younger, in basketball. He always told me, ‘You’re not going to give up. I didn’t raise you to be like that.’  He said, ‘You either give it all you got or you go home.’  So every time I get on that court or on that course, I give it all I got just for him.”

Dominic’s deceased father also blessed him with a little brother.  “My brother and I are 9 years apart.  I know that’s a big difference, but he’s my best friend.  He looks up to me like I’m his dad.  I may be really tough on him, but that’s the way my dad was and that’s why I’m successful and where I am today.”

Dominic Lopez has worked hard to compete, challenge others and he’s earned another candle on the birthday cake. 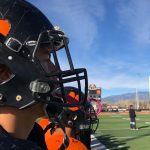