STORM RUNNING BACK NAMED PLAYER OF THE YEAR

Cleveland High School running back Dorian Lewis was named the Gatorade New Mexico Football Player of the year.  Lewis, a transfer from El Paso in his first year with the Storm, rushed for 1,583 yards and 20 touchdowns.  The junior also had 276 receiving yards and four touchdown catches.  Lewis helped his team reach the Class 6A state championship game.

He tore his anterior cruciate ligament in his knee 9 games into the year and missed the rest of the season.

The award recognizes not only outstanding athletic excellence, but also high standards of academic achievement and exemplary character demonstrated on and off the field.

“Dorian is a special talent,” said Rex Henderson, head coach of Artesia High, in a press release. “We struggled to tackle him—he just makes people miss. Even when we had multiple players in position, he would break free. He combines speed and power, but the elusiveness is what makes him special.” 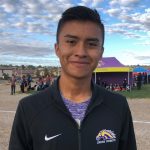