TEXICO VOLLEYBALL IS MAKING A DRIVE FOR FIVE

Most state volleyball tournaments everyone is seeing green, as in Texico.  They’ve played in the championship every season except one over the last 13 years.  This year, Texico is going for five in a row.

“Has it been different?,” questions head coach Kristen Scanlan.  “I say we’re not quite as explosive offensively, but we really have come along this year so I can’t really say that.  It’s just a different group of girls.”

Each year the group comes up with a different slogan or motto.  This one hangs on the gym wall as a reminder.

“Our motto is right up there, it’s GIHGAM which is God in heart, game in mind,” said senior Baylee Sours. “It’s a big part of what we do and we’ve held true to it this year.”

“One of my close friends came up with GIHGAM,” explained Jasmine Davalos.  “If we’re having a rough time or practice or game we say ‘GIGHAM’ and make sure we know what it stands for and we think about it during our timeout and work harder than we had been working.”

Texico has 14 state volleyball titles.  Head coach Kristen Scanlan has led them to eight of those.

“Because I’ve been there for multiple titles helps them be a little more calm and know what to expect,” Scanlan said. “We talk about where we’re playing, the Santa Ana Star Center. We try to drill it with a lot of noise, a lot of whistles, as we get ready because that’s what we’re going to experience with those four courts.”

They only return three players who saw significant playing time last year, but all they know is winning.

“I think they put pressure on themselves because they want to step up to the standard, but each team is different,” said the veteran coach. “We approach it differently and we try to do things to alleviate the stress.”

“I think there’s a little bit of pressure but coach Scanlan always wants us to know that there’s a lot more than just winning,” said Davalos.  “Winning is important but it comes with learning lessons that will later in life pay off.”

They say the key at state is to keep calm and play on.

“Really just stay calm and keep your composure,” said Sours.  “That’s a huge part of state because there’s a lot of people, a lot of yelling, so you just have to stay calm and play your game.” 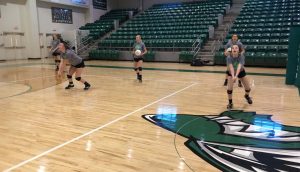 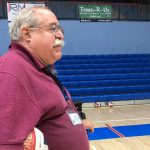 LAS CRUCES BULLDAWGS ARE BACK WITH SOME BITEGeneral News, Press Releases 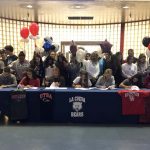