LOS LUNAS TIGERS TRYING TO START THEIR OWN LEGACY

The orange and blue of Los Lunas hope to bring home a blue trophy this weekend.  The Tigers take on Roswell Saturday for the 5A state football title.

“We know we have to limit their big plays and we have to play sound defense, read keys, and make sure we get after them,” said Los Lunas head coach Jeremy Maupin.  “We just have to stay consistent with what’s got us here too.”

What got them here is a strong performance by a backup.  The Tigers lost starting quarterback Nick Gaerlan who went down with a knee injury halfway through the season.  But the team has rallied behind Kade Benavidez, winning five of their next six games, including last week in the semifinals against Goddard.

“It’s been real nice,” said Benavidez.  “A lot of people have confidence in me.  The support is there.”

“Kade’s really settled in,” said Maupin.  “The first week we threw him into the fire because it was against Goddard there on a short week after playing on a Saturday.  We slowly put together a different offense and a little bit different things than we were doing.  He’s grabbed a hold of it and the whole team, offense and defense, really rallied behind him.”

Roswell beat Los Lunas once already this season.  The Tigers lost 42-20 back in week four.

“Just like Goddard all over again,” said senior Mikey Montoya.  “Let’s see if we can redeem ourselves.”

“I think we’re also playing a lot better football than we were,” said Maupin.  “We’re different than when we played them.  We had Nick at quarterback, which we wish we still had. It’s really made us more balanced in some areas and do some things differently and try to play to Kade’s strengths differently.  We’re a lot different than the team they saw then and we’re playing our best football.”

Los Lunas has never won a state football title and the community is as excited as the team about the possibility of one.

“They want this as bad as we do,” explained Maupin.  “It’s something they’ve never gotten here before and that‘s why we chose ‘Legacy’ as our phrase for this year.  We wanted to start a legacy and be that team that’s the first one and that every team after that believes that they can win as well.  That’s our goal.  We’re hoping that we show up and play good football Saturday.”

Kickoff scheduled for one o’clock. 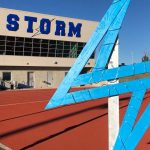 CLEVELAND STORM HOPES A BLUE TROPHY IS IN THE FORECASTGeneral News, Press Releases