CLEVELAND STORM HOPES A BLUE TROPHY IS IN THE FORECAST

The 6A State Football Championship is set.  It’s unbeaten Cleveland against unbeaten La Cueva.  Number one versus number two at Cleveland High School Saturday afternoon. The Storm dominated the competition this year and they haven’t skipped a beat since losing their star running back.

Cleveland High School is back in the championship game for the first time since running the table in 2015.

The Storm outscored the competition this year by 350 points.  They beat Volcano Vista last week in the state semifinals.  It was actually the first time Cleveland trailed all year long.

“I think you build off that,” said Ridenour. “Our kids understand that it’s a four-quarter game and everything is not always going to go your way.  We’ve been pretty fortunate for the way the ball’s been bouncing for us this year. They got up on us and we battled back and now we know what it feels like to have to battle back and play four quarters.”

“That’s kind of unrealistic, not trailing the first 11 games of the season,” said running back Colten Madison.  “I feel like we got better and that’s a step we needed to take.”

“Not every game we could jump out and take the lead and never trail,” added senior Braedin Ross. “This is what football really is and we just knew we had to bounce back and not give up and keep fighting.”

Cleveland won it all in 2015, but their head coach says this group is different.

“This team is younger, so you wonder how their focusing and where their mind is,” explained Ridenour.  “This is a tight knit group.  The ’15 group was super focused.  They were made about the way the 2014 season ended.  This is a whole new group of guys and they just created their own identity.  They are different that any other team we’ve had.”

The Storm hasn’t had a running back like Dorian Lewis in a while.  The transfer from El Paso came in and took 6A by Storm.  The junior rushed for over 15 hundred yards and 20 touchdowns, along with another four touchdown receptions.  But in the second to last game of the regular season, Lewis went down with a severe knee injury and was lost for the rest of the year.

“As an offensive line, it gave us a chip on our shoulder to make bigger holes and to work harder to make sure none of our other running backs go down,” said senior offensive lineman Travis Lorenz.

“That kind of goes into the process of how we do things,” said Ridenour.  “One of the biggest words we use in our program is team.  There’s not one player or one person that’s bigger than the team, that includes me.  Our team could go out and win right now without me, no problem.  It’s not a big deal.  As good of a player as Dorian is, our team is not going to miss a beat when we’ve got five guys up front that can pave the way and create holes and we’ve got guys that can run through em and a quarterback that can throw and receivers that can catch.”

That quarterback is Jeff Davison, a productive-underclassmen under center.

“You don’t expect that from a sophomore at all,” Ridenour said.  “I think he’s just been cool, calm and collected the whole way.  He doesn’t get real high, he doesn’t get real low.  He’s just pretty even keel the whole way through. He’s efficient running our offense. He lets receivers make plays.  He doesn’t have to throw a perfect ball, he just has to throw a catchable ball.”

The Storm get to host the Bears with the 6A blue trophy on the line.

“I expect a close game,” said Ross.  “They have a really good defense and so do we.  I don’t think it’s going to be a real high scoring game.”

Kickoff scheduled for Saturday at 1. 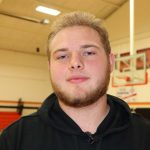 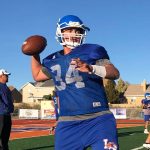