JAMES BORREGO: THE PATH OF RESILIENCY

James Borrego worked his way up the professional basketball ladder all the way to the NBA.  He is currently the head coach of the Charlotte Hornets.

James Borrego was born and raised in Albuquerque, New Mexico.  Borrego played four years of varsity basketball at Albuquerque Academy under head coach Mike Brown and was a part of 2 state championship teams. After graduating from Albuquerque Academy in 1996, Borrego chose to attend Northeastern Junior College in Colorado.

“I could have gone to an Ivy League school or play Division II, but I thought I needed to grow more and get better and push myself,” said Borrego.  “My academic advisors were against it at the time, but I sold them on it.  So, I went to junior college not knowing what the next step was going to be.”

His next step turned out to be southern California.  After one year at Northeastern, Borrego transferred to the University of San Diego. He played three years with the Toreros, earning West Coast Conference All-Academic honors.

“In the transition from my junior to senior year, I knew I wasn’t going to play a lot.  I worked as hard as I could, but the playing time wasn’t there.  I thought, ‘What will I do next?’.  That was coaching.  Coaches were a major part of my life growing up, father figures, great examples for me. I always had a real passion to help other kids like me.  I knew my playing days were coming to an end.  (USD head coach) Brad Holland offered me a graduate position, so I started working on my masters.  I started to learn more about the game, learning about recruiting and I realized I like this.  I could see myself coaching.”

Borrego is married to his high school sweetheart, Megan.  They have three kids and occasionally return to Albuquerque to see family and friends.  Here is some of the conversation I had with the NBA head coach. 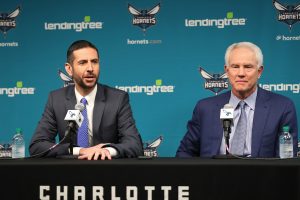 CHARLOTTE, NC- MAY 11: Charlotte Hornets General Manager, Mitch Kupchak introduces James Borrego as Head Coach of the Charlotte Hornets during a press conference in Charlotte, North Carolina on May 11, 2018 at the Spectrum Center. Copyright 2018 NBAE (Photo by Kent Smith/NBAE via Getty Images)

When did you first start playing basketball?

I was probably 7-8 years old and played at the Boys & Girls Club in Old Town (Albuquerque).  I was around very good coaches growing up. John Whisenant was my AAU coach. He knew what the college game looked like and understood player development.  He was a big part of pushing my career forward.

What do you remember about your high school days at Albuquerque Academy?

I think Academy is a place that changed my life.  I grew up on the west side of Albuquerque, but when I got to Academy my world changed. My mentality, everybody there, it was expected you were going to go to college.  The teachers pushed you to get better every day.

It taught me how to work and grow. I remember being in a competitive environment, with basketball especially.  They were winning state championships.  I saw a lot of structure that I took with me to this day.  It transferred with me to my professional life.

What’s your best basketball memory as a player?

Playing on the Pit floor always stood out to me.  As you go through a high school season, you always want to get to the Pit.  That’s special.  For me, winning a state title my sophomore year was memorable. Celebrating on the floor, in the locker room, I can still see it today.  Another memory, for good or bad, was getting injured on the Pit floor my junior year.  I rolled my ankle and tore two ligaments in the quarterfinals.  We were about to play NMMI, and Taymon Domzalski, the following night. We were sort of eyeballing each other during the season. The matchup was about to happen, then I rolled my ankle on the baseline and I didn’t think I could play going into the semifinals.  Dr. Ball said ‘You have to show me you can hop on the ankle for 10 hops. I did everything I could to get through it. I was not going to miss that game for anything. We won the game, I don’t remember how well I played.  I just remembered we got to the state finals, which was a bitter memory because we lost to Artesia (86-83).

Was it frustrating waiting to get that shot as a head coach?

I think my journey, as a whole, is to try and get better every single year.  I had some mentors that said ‘Put your time in and you’ll get better and get your shot’.  I didn’t have my eyes on being a head coach someday.  Things changed when I took over in Orlando as an interim head coach.  He (Jacque Vaughn) took a chance on me as his top assistant.  Until you’re in that seat, you have no idea what it’s like (being a head coach). Those 30 games taught me I could do this job. It’s a lot of work, but I felt like I’m prepared for it.  I tried to keep the job after that interim stint. They went with Scott Skiles, but it fueled the fire.  I used it as motivation for my next opportunity.  I went to san Antonio, Pop could have hired anyone in the world. I was fortunate he took a chance on me and in those three years I grew more and more.  I started to get my mind and thought process of what would I look like in the position of head coach someday.

I interviewed in Houston and Memphis, finalist for both. I was right on the doorstep, but felt good, used it as fuel to get better.  All those doors closed for a reason. It led me to Charlotte.

I interviewed with Phoenix and New York. Charlotte was my third interview and Milwaukee was scheduled to be my fourth.  Charlotte came calling and one interview led to two and by the third, I was meeting with Michael Jordan for the head coaching job.  I think all these doors closed for a reason, they led me here.  I fit well with the organization and this is my door and this is my opportunity.

What was it like being interviewed by Michael Jordan?

I was at his home in Florida. I was interviewing to become his head coach. It was surreal, but I had to go into that meeting with the mentality I wanted to be his head coach.  I had a vision and a plan and it aligned with his plan and here I am today.

Who is your coaching mentor?

They all played a part in the puzzle for me, Mike Brown at Academy, John Whisenant, they taught me how to work and be a part of a team and how to compete.  Brad Holland at USD gave me the opportunity.  In San Antonio, my world opened up as far as learning basketball.

I was around Pop, PJ and some really great coaches and minds that I learned under.  I could also add the players to that mix, Duncan, Horry, Ginobili, Parker.  Great players make coaches look better.

I believe everybody has a story.  If we were writing a book or movie about your life, what would the title of your story be?

The path of resiliency. This is all a journey for me, ups and downs, and through that I tried to stay resilient and that’s what life is about. 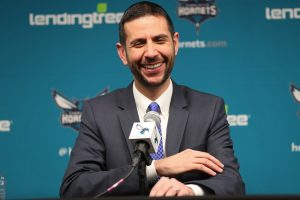 CHARLOTTE, NC- MAY 11: James Borrego speaks to the media after being hired as Head Coach of the Charlotte Hornets during a press conference in Charlotte, North Carolina on May 11, 2018 at the Spectrum Center. 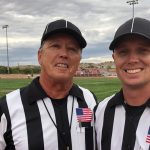