The state of New Mexico mourns the tragic death of a special woman.  But the people of New Mexico can also thank a local hero from preventing even more loss.

Earlier this week, Shults made national headlines when a plane she was piloting suddenly lost an engine.  The explosion sent shrapnel into the plane, shattering a window and tragically killing New Mexican Jennifer Riordan.  Shults was forced to make an emergency landing in Philadelphia, saving the lives of 148 people and preventing further tragedy.  After the identity of the hero pilot became known, the name was familiar to many New Mexicans.

“I was shocked,” said Albuquerque High athletic director Doug Dorame.  ”I was a year ahead of her in high school.”

Shults graduated from Tularosa High School in 1979.  Her maiden name is Bonnell and her first name was spelled Tami.  Tammie Jo ran track with the Wildcats.

“I remember Tammie as being a unique person in that she had such a wide range of interests and abilities and she was good at all of them,” said Tularosa classmate Connie Beckett Stallings who now lives in Midland, Texas.

“From good times spent at her family farm, to cheerleading and studying chemistry together, I will say she was one of those great friends and lots of fun too.”

Capitan teacher Joyce King grew up with Tammi and the two skied together at Ski Apache once or twice a month.

“Tammie Jo was a very nice, sweet and kind person,” Joyce recalls.  “She was intelligent but humble.  She was a friend to everyone and well-liked by students and teachers.”

According to the Tularosa yearbook, Tami Bonnell was in the high school band, played volleyball, competed in track, as well as becoming a cheerleader while staying involved in drama club, the science club and student council.

“She was in the high school band and I was in drill team so we all traveled together in the bus to go to out of town games,” remembers Penny.

“She was very intelligent and graduated at the top of our class.  A very kind person and so very nice to everyone.”

“We are very proud of her and all of her accomplishments leading her to this heroism.  Our hometown of Tularosa is beaming with pride.”

Connie echoes those sentiments.  “When I found out she was the pilot who safely landed the Southwest Airlines plane, I was not one bit surprised!  I read she was telling the passengers THEY did a good job when clearly, it was HER calm confidence, HER skill and composure under pressure and most importantly her faith in God that landed that plane.”

After high school, Tammie Jo Shults graduated from MidAmerica Nazarene University in 1983 and according to them Shults was one of the first female fighter pilots in the U.S Navy.  Following active duty service, she went on to become a pilot for Southwest Airlines.

United States representative Martha McSally was so moved by the heroic efforts of Tammie Jo Shults she introduced a resolution in Congress to honor Shults.

“Captain Tammie Jo Shults is nothing short of an American hero,” McSally said.  “Not only did she pave the way for women like me in aviation, but husbands, wives, mothers, fathers, sons, and daughters are alive today because of her. I’m introducing this resolution to commend her for her service to our nation—in both military and commercial cockpits.”

New Mexico lost a kind and generous soul in Jennifer Riordan.  But thanks to a dedicated female pilot from Tularosa there are at least 148 people who are thankful to be alive. 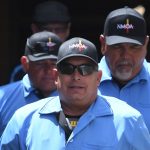