Also the state’s 2019-20 Gatorade Player of the Year, the 5-foot-10 senior raced to the Class 5A individual state championship this past season with a time of 18:17.41, leading the Storm to the state title as a team. Futey won seven races, including the New Mexico All-Star meet, the Los Alamos Invitational, the Rio Rancho Jamboree and the Albuquerque Public Schools Metro Championships. She also finished ninth in the 5K Sweepstakes race at the prestigious Desert Twilight Festival in Arizona.

Futey has a sister, Elle, with special needs and has volunteered locally on behalf of multiple Special Olympic events, most recently the Unified Marathon team. She has also donated her time at USATF New Mexico events in addition to participating in community service initiatives in association with her church youth group.“Futey is the top girls distance talent to represent the entire state of New Mexico since 2017-18 Gatorade GXC Player of the Year Amanda Mayoral led the Storm program,” said Erik Boal, an editor for DyeStat.com. “She was unbeaten against in-state competition last fall and her performance at the Desert Twilight Festival was the most significant result achieved by a New Mexico prep girl competitor all season.”

Futey has maintained an A-minus average in the classroom. She has signed a National Letter of Intent to run on scholarship at Syracuse University this fall. 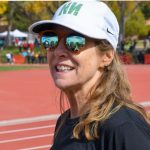