The U.S. Track & Field and Cross Country Coaches Association (USTFCCCA) announced the state-by-state winners of its ninth annual High School Cross Country Coaches of the Year Presented by the United States Marine Corps. One boys coach and one girls coach from 50 states – as well as the District of Columbia – were honored for their successes during the fall of 2022, as selected by a committee of experts from around the nation.

State-by-state winners were selected based on their teams’ performances throughout the 2022 cross country season. Among the factors taken into consideration were team score and placement at the state championships, margin of victory, performance against rankings if available, individual championships, and how their teams’ performances stacked up to previous years (e.g. first title in school history, consecutive titles, etc.).

“This honor is based upon your leadership and the success of the cross country team throughout the season,” noted Sam Seemes, CEO of the USTFCCCA. “It’s also a reflection of your hard work and the dedication of the student-athletes, the coaching staff, and the administration of the school.” 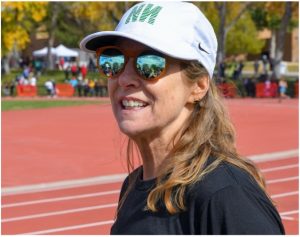 “The recognition is an honor and is a tribute to all of the coaches and the team,” said Coach Hipwood.  “This year was unique because it took a leap of faith on the part of the girls after a big turnover of last year’s varsity. The win was hard-fought and definitely rewarding, but the way the entire team embraced the whole process and gained confidence and trust in each other throughout the season made it very special.”

The Los Alamos Girls Cross Country team was undefeated for the second consecutive year against New Mexico schools from all divisions. They won the 2022 4A State Championships last November with the fastest top 5 average of all divisions. This state championship was the fourth in a row and 21st girls title for Coach Hipwood in her 29 years as head coach. With seven boys’ titles, Coach Hipwood has earned more championships than any other cross country coach in New Mexico history.

The Rio Rancho Boys Cross Country team won the 2022 5A State Championships last fall.  The Rams had five runners in the top 13 spots in their classification.

The USTFCCCA High School Coach of the Year Award Program is sponsored by the United States Marine Corps. Started in 2014, the program recognizes the best high school boys’ and girls’ coaches, at both the state and national levels in cross country and track & field. A boys’ and girls’ coach from each of the 50 states and the District of Columbia are chosen at the end of each respective season as state-by-state winners, and from there, those 102 honorees are vetted, and two national award winners are selected. 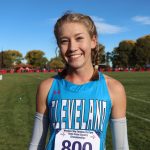