HOBBS IS BACK WITH A HEALTHY WISDOM ANTHONY

The Hobbs High School girls basketball team has played in the state final each of the last five years, winning it twice during that time.  This season the Eagles are one of the favorites to make another deep run in the postseason with a healthy senior guard who happens to be one of the top players in New Mexico.  Wisdom Anthony returns to the lineup after missing last season with a torn ACL.  Hobbs head coach Joe Carpenter says this year’s bunch is an experienced team that can play faster than they have in the past.  “Before, we would turn the ball over quite often and we had to slow them up,” explained Carpenter.  “But this year we will let them go.”

Here is an interview with Hobbs head coach Joe Carpenter. 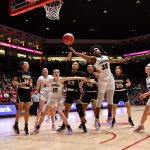