NOTAH BEGAY III INDUCTED INTO THE NFHS HALL OF FAME

On Friday, New Mexico’s Notah Begay was officially inducted into the National Federation of State High School Associations (NFHS) Hall of Fame.  Begay was introduced with the 2022 Class at the annual NFHS Summer Meetings in San Antonio, Texas.

“It’s a reflection of all the wonderful people who stood behind me throughout my career,” said Begay.  “I’m taking some time to reflect on all the people who allowed me to be here.” 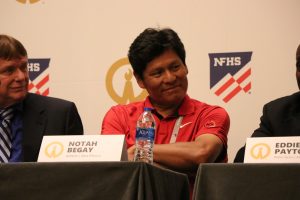 Notah Begay played and excelled in three sports at Albuquerque Academy in the late 1980’s.  Although golf became his primary sport at the college and professional levels, Begay also excelled in basketball and soccer.  He played on the first two (1989 and 1990) of Academy’s eventual six consecutive state championship basketball teams and led his soccer team in assists, earning all-state honors in both sports.  Begay was all-state and all-American in golf and was voted New Mexico’s high school athlete of the year as a senior.  He won the New Mexico Activities Association Class A-AAA state golf title in 1989 and 1990 and claimed the National High School Golf Championship as a senior.

“My high school career was always about relationships and my teammates and working toward the goal,” said Begay.  “It wasn’t always about winning the championships, but what we did to get there.  Those are days we would all love to experience again.” 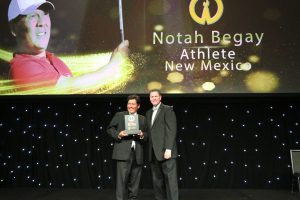 Begay earned a scholarship to Stanford University and was a three-time all-American and captain of the 1994 team that won the NCAA national championship.  The only full-blooded Native American to have played on the PGA Tour, Begay was a four-time winner and played on the U.S. team at the President’s Cup in 2000.

“The equation for success hasn’t changed,” said Begay.  “It’s what are you willing to sacrifice and how much work are you willing to put into it and those same things exist today.  Take care of your academic responsibilities and put in the time and effort into your sport or activity, focus on what you’re doing, be a good teammate and servant in your community and good things will happen.” 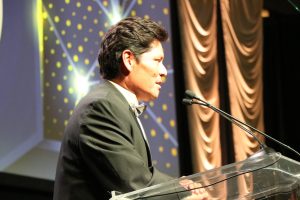 Since 2013, Begay has been a golf commentator for NBC and the Golf Channel.  In 2005, he established the NB3 Foundation, with the goal to provide health and wellness education to Native American youth in the form of soccer and golf programs.

“I always felt like there’s an opportunity to use all the wonderful things that have happened to me and pay it forward,” said Begay.  “If there’s some way I can provide a pathway or inspiration for them to achieve their dreams, that’s what people did for me.  So, it’s my time to give back and be that motivation.” 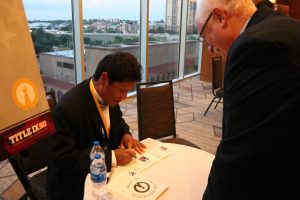 Begay is one of four standout athletes inducted into the NFHS Hall of Fame this year.  Joining Begay in this year’s class is the late NFL Hall of Fame running back Walter Payton, Olympic track star Sanya Richards-Ross, and NFL standout Thurman Thomas.

Three highly successful high school coaches, three former state association administrators, one contest official, and one speech and debate coach in the performing arts area were also inducted.  The 12 honorees were inducted July 1 at the 39th induction ceremony of the National High School Hall of Fame at the NFHS Summer Meeting in San Antonio, Texas. 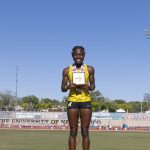