The 5-foot-4 junior exploded for 38 individual points at the Class 5A state meet this past season, capturing three championships and taking second in the long jump to lead the Tigers to their second consecutive state team title. Stinson set a personal-best this spring in each of her four signature events, clearing 5 feet, 8 inches in the high jump, soaring 18-9 in the long jump, clocking a time of of 24.88 seconds in the 200-meter dash and breaking the tape in the 100 prelims at states in 11.91. At the time of her selection, the three-time state champion’s best high jump clearance was ranked as the nation’s No. 40 (tie) performance among prep girls competitors this spring.

Stinson has been an active parishioner of her local church community and takes on many of the household responsibilities for her family, especially helping to care for her younger step siblings, since both of her parents are active-duty military. “In her last season competing in New Mexico [due to her parents’ recent military transfer], Yvonne has progressed from a state-meet podium contender to a nationally ranked athlete,” said Jaren Brooks, MileSplit New Mexico editor. “A three-event state champion in New Mexico’s largest classification this spring, she has made enormous advancements in the high jump to land her among the Top 40 prep girls in the country in 2022.

Stinson has maintained a 3.29 weighted GPA in the classroom. She will begin her senior year of high school this fall.

Gatorade has a long-standing history of serving athlete communities and understands how sports instill valuable lifelong skills on and off the field. Through Gatorade’s “Play it Forward” platform, Stinson has the opportunity to award a $1,000 grant to a local or national organization of their choosing that helps young athletes realize the benefits of playing sports. Stinson is also eligible to submit a short video explaining why the organization they chose is deserving of one of twelve $10,000 spotlight grants, which will be announced throughout the year. To date, Gatorade Player of the Year winners’ grants have totaled more than $3.5 million across more than 1,300 organizations. 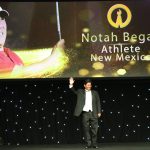