After three-and-a-half decades of coaching, Ray Rodriguez decided to step away from the game.  Rodriguez recently retired as head basketball coach at Cibola High School.

“You look up and suddenly it’s been 35 years as a head coach,” said Rodriguez.  “The older guys I knew always told me ‘You’ll know when it’s time’ and they were right. I felt like it was time.”

During his time as a head coach, Rodriguez racked up 503 career wins.  He started his coaching career during the 1987-88 season when he took over the program at Highland High School, his alma mater.  “I remember we played Cibola in the opener and Phil Schroer was the head coach at the time,” Rodriguez recalled.  “We’d been known for our man defense. It’s funny because for most of that game we played a matchup zone, that’s what I remember the most.”

“Back then, I was doing the same things then that I do now, cleaning spots on the floor during the JV game, all that stuff.  Not much has changed.  As a head coach, you do it all. No job is too big or too small.  It was nice to get my first head coaching job from a school I graduated from.”

Rodriguez led the Hornets to the state championship game in 1992 and 1993.  After seven seasons as Highland’s head coach, he spent four years coaching basketball in Seattle.  He would later return to the Land of Enchantment to take over the program at Cibola High School where he spent 24 seasons in charge of the Cougars.  Rodriguez led Cibola to the state championship final in 2004, falling short against Eldorado 45-41.

Rodriguez says he’s had a passion for basketball his entire life.  “I always knew I wanted to be a teacher and a coach,” he said.  “Basketball is a really good sport and vehicle to teach life skills and discipline to kids.”

“I hope all the kids I coached know that I put everything I had into it. I was always prepared and put them in the position to be successful. We had some tough practices where my main goal was to get them to believe they can overcome difficult things.  We had this one drill where they had to make three perfect stops, or we would start over.  To this day, I have kids that come up to me and say, ‘That drill taught me I could continue when I thought I couldn’t.’  That will help them overcome obstacles and tough times in life.”

Former Espanola Valley coach Gabe Martinez will take over the Cougars this season.  As for the 62-year old Rodriguez, he will remain the athletic director at Cibola High School, a job he’s had for 10 years. 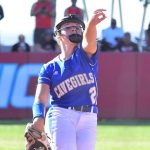