The 5-foot-10, 190-pound senior running back rushed for 1,553 yards and 26 touchdowns this past season, leading the Rams (9-2) to the Class 6A state championship game. A four-year starter, Vigil also caught three TD passes and threw for another score. He concluded his prep football career with 3,050 rushing yards and 55 total touchdowns.

Vigil has volunteered locally with the United States Marine Corps Reserve’s Toys for Tots program and the Senior Olympic Games. He has also donated his time as a youth athletic trainer. “Zach is always willing and committed to putting the team first,” said Gerry Pannoni, head coach of Rio Rancho High School. “Weekly, we challenged him and added to his responsibilities, both as a player and a leader, and he continually rose to every challenge.”

Vigil has maintained a weighted 4.05 GPA in the classroom. He has made a verbal commitment to play football on scholarship at the University of New Mexico next fall.

Gatorade has a long-standing history of serving athlete communities and understands how sports instill valuable lifelong skills on and off the field. Through Gatorade’s “Play it Forward” platform, Vigil has the opportunity to award a $1,000 grant to a local or national organization of their choosing that helps young athletes realize the benefits of playing sports. Vigil is also eligible to submit a short video explaining why the organization they chose is deserving of one of twelve $10,000 spotlight grants, which will be announced throughout the year. To date, Gatorade Player of the Year winners’ grants have totaled more than $3.5 million across more than 1,300 organizations.

To learn more about the Gatorade Player of the Year program, check out past winners or to nominate student-athletes, visit playeroftheyear.gatorade.com or follow us on social media on Facebook at facebook.com/GatoradePOY, Instagram at instagram.com/Gatorade and Twitter at twitter.com/Gatorade. 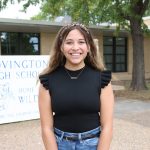 WELLNESS WEDNESDAY: “I don’t want anyone to have to receive the phone call I did”-BROOKLYN ARREOLA, LOVINGTON HIGH SCHOOLGeneral News, Press Releases