Last season, Volcano Vista junior Natalia Chavez hit one of the most memorable shots in the history of the New Mexico state basketball tournament.  Last week, Chavez signed her National Letter of Intent to play basketball at the University of New Mexico.  We had a chance to talk with Chavez about that memorable moment in the Pit.

The Eagles tied it up with a three pointer in the final ten seconds of overtime. With the game tied at 49, Volcano Vista had one last shot to try and win the championship in the final three seconds. “I had a lot of confidence and I knew I wasn’t going to back down because we lost to them the year before and coming back I knew we had a chance to win it,” said senior Natalia Chavez.

Nobody in the building could have predicted what was about to happen next.

Junior Natalia Chavez with half-court game winner at the buzzer to win the state championship. “I actually watched the whole game over again last week and I still feel the nerves that were going through when when I made that shot,” said Chavez.

The shot was played over and over again on social media and eventually made it’s way to ESPN for even more national attention. “I come from a small reservation and there’s not a lot of kids that get noticed there, so it was a good feeling to for me to get my reservation out there and know that a Native American girl can actually do something really big.”

As we head into the new season, is everyone expecting another dramatic half-court shot? 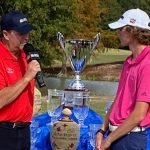