Each March during the State Basketball Championships, the New Mexico Activities Association recognizes the accomplishments of previous title teams with a banquet involving the championship squads from 25 and 50 years ago.  Because of circumstances surrounding the COVID-19 public health threat, this year’s banquet was not able to take place.  We would still like to recognize the accomplishments of those championship teams.

Here’s a look back at the championship basketball teams from 1995.

The first team we will recognize is the 1995 Class A Girls Champions Elida Lady Tigers and head coach Randy Zarate, who finished their season with a 26-3 record. It was the first state title in school history.        In the quarterfinals, the Lady Tigers claimed a tight 42-38 victory over Fort Sumner. Elida forced 26 Vixen turnovers with its pressing defense. Jennifer Winders led Elida with 13 points and Abby Orcutt added 10. In the semifinals, Elida took on defending state champion Roy and all-state forward Kristy Hartley. The Lady Tigers used a 13-2 scoring run, with center Abby Orcutt scoring all 13 points to claim a 73-56 upset. Their defense held Hartley 20 points below her 34 points per game average. Orcutt finished with 24 points and 11 rebounds. In the championship, the Lady Tigers faced Melrose and staged one of the biggest comebacks in state tournament history. Down 28-8 in the second quarter, they rallied to win the school’s first state title 54-51. Abby Orcutt, once again, led the scoring with 15. 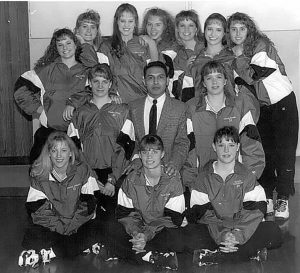 Next, is the 1995 AA Girls Champions, the Navajo Prep Lady Eagles who were coached by the late Robert Adams and finished their season with a record of 25-3. In the quarterfinals against the Mora Rangerettes, the Lady Eagles picked up a 79-62 win over Mora. Crystal Martinez led Navajo Prep in scoring with 21 points. The semifinal saw opponent Hatch Valley go down by the score of 60-53. The Eagles raced to a 17-2 lead as Shelby Begay hit seven 3-point field goals and scored 34 points in the win. In the championship game, the Eagles faced defending state champ Clayton. Sophomore point guard Melanie Allen scored 14 of her team leading 17 points in the second half to pull away from the Yellow Jackets to capture the school’s first state title. Prep’s stingy defense held Clayton scoreless for a 6-minute stretch of the 4th quarter. 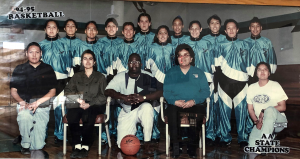 The AAA Girls State Champions in 1995 came from defending state champ Kirtland Central High School, under head coach Dexter Irvin, who finished the season with a stellar 28-2 record. It would be the third of four consecutive championships for this basketball powerhouse, and the 11th championship over a fifteen-year period. The Broncos raced to the championship with a convincing quarterfinal win over Silver City 59-34 led by the scoring of 6’1” forward Karin Karlin. Coach Irvin called the team’s performance “complacent” and compared it to the “dictionary definition of Ugly.” It got his team’s attention.  The semifinal against the Moriarty Pintos, an 86-51 drubbing, was the Karin Karlin show as she poured in 35 points to go along with 23 boards. In the championship game in front of 15,000 fans, the 8th finals meeting in 9 years between Kirtland and Shiprock was no surprise. In 8 championship games between the two teams 3 points was the largest margin of victory. But this final was never close, as the Broncos led from the opening tip in a 68-49 win. Karlin once again led Kirtland Central with 31 points and 17 rebounds.

In 1995, the Eldorado Eagles, under head coach Don Flanagan regained their championship mantle in the girls AAAA classification, finishing the season with an impressive 24-3 record. The quarterfinal was a rematch of the previous year’s championship against Gallup. The Eagles got by the Bengals in a low scoring contest 39-33. In the semifinal, the Eagles took on Rio Grande and beat the Ravens, 50-35.  6’2” center Katie Kern scored 19 points and Julie Smith added 12. In the championship, the Eagles faced district foe Sandia, who had beaten them the previous week. The Eagles defensive intensity never let up and wore down the Matadors in a 47-21 win. Kim Perea led the Eagles with 12 points and Julie Smith added 10 points in the championship win. 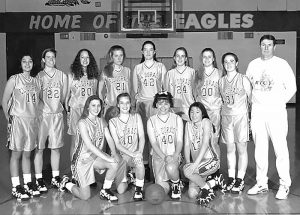 We would also like to recognize the officials.  These dedicated men and women are a valued and integral part of the sport. We are at a critical place in high school sports, where fans and sometimes coaches are driving our valued professionals out of the game and making the games less enjoyable for the participants. Without the officials, the games would not be able to take place.  Here’s a look at the men and women who were members of the 1995 Boys and Girls NMAA State Championships officiating Crew. 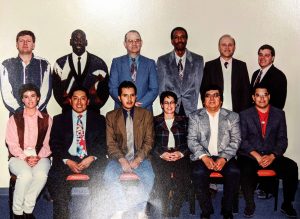 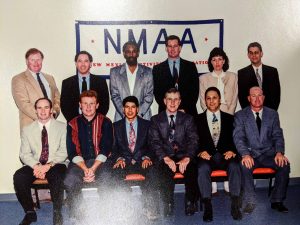 The 1995 Grady Bronchos completed their Class A championship season with an impressive 27-2 record under coach JD Isler. In the quarterfinals, the Bronchos faced Mountainair and reached the century mark for the 4th time in the season in a 114-71 track meet. They got 29 points from leading scorer Kiley Richardson. Next up was the Cliff Cowboys and a rematch of the previous year’s state championship game. Guard Justin Fraser put the Bronchos on his back in the 4th quarter as he hit 6 straight free throws in the final two minutes to secure a 75-71 win. Brothers Kelsey and Kiley Richardson led Grady in scoring with 26 and 15 points respectively. Westin White added 12 and Fraser had 10. In the championship game, the Bronchos finally broke a two year finals jinx as the team defeated Melrose 92-83. Kiley Richardson led the way with 32 points and 13 board and was supported inside by Greg Gardner with 14 and Justin Fraser with 10.

In Class AA, the Mora Rangers and Coach Richard Martinez were the stars of the AA Division, finishing the 1995 season with an impressive 27-2 record.  In the quarterfinals against Newcomb, the Rangers rode the play of 6’6” Australian transplant Nash Campbell to secure a 73-51 win. Andres Valdez and James Sandoval each scored 18 to lead the win. In the semifinals against Dexter, Mora was never threatened in the second half with a 56-41 win. Andres Valdez led with 21 points, James Sandoval had 12 and Campbell earned a double-double with 11 points and 11 boards. In the final against Tularosa, Mora went on a 13-2 run in the second half to lead by 11 at the end of the 3rd quarter. The Rangers secured a hard fought 59-54 win. Campbell led all scorers with 19 and Valdez added 16 for the champs. 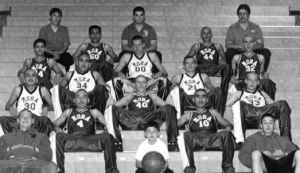 In the 1995 AAA Championship, the Artesia Bulldogs and head Coach Bubba Jennings fashioned a 20-9 record and spoiled Albuquerque Academy’s bid for a 7th consecutive state title. In the opening round, the Bulldogs ended the top ranked Silver City Colt’s season with a dominating 68-48 win. Andrew Patterson led the balanced Bulldog attack with 18 points. In the semifinals, the Bulldogs made up a 10-point deficit in the final 68 seconds of the game to win 73-72 over the Grants Pirates. An old fashioned 3-point play by Andrew Patterson capped a stunning comeback. Patterson again led Artesia with 26 points. The Bulldogs then took on 6-time defending champ Albuquerque Academy in the championship game. Artesia forced 27 Charger turnovers and converted those into 34 points as they prevailed 82-73. Cord Wilburn led Artesia with 30 points including 12 for 12 free throws in the 4th quarter. Patterson added 27 as the Bulldogs, New Mexico’s premier football power, won their first basketball state title.

In the “big school division”, the Bulldogs of Albuquerque High School finished their season with a 23-3 record under legendary coach Jim Hulsman. In the opening round, it was Albuquerque High and 6’9” 245-pound big man Kenny Thomas against the Hobbs press in a classic matchup of styles. The Bulldogs handled the pressure in a 82-76 win. Thomas ended up with 13 rebounds, 7 assists and 6 blocks to go with 31 points in a dominating performance. In the semifinals, the Bulldogs met Mayfield. In a low scoring contest, the Bulldogs survived a near upset 36-35. Thomas led again with 16 points and 12 boards. In the championship game, it was dogs and cats as the Bulldogs took on the Clovis Wildcats. Point Guard Damion Jenkins fueled a 16-1 run to lead AHS to their 6th title under Coach Hulsman, 71-59. Jenkins scored 30 points in the final and Thomas added 22 to go along with 14 boards. 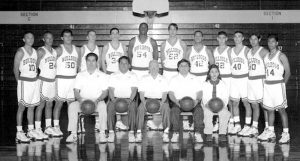 A story recognizing the state champions from 1970 is coming soon. 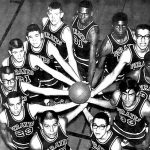