Each March during the State Basketball Championships, the New Mexico Activities Association recognizes the accomplishments of previous title teams with a banquet involving the championship squads from 25 and 50 years ago.  Because of circumstances surrounding the COVID-19 public health threat, this year’s banquet was not able to take place.  We would still like to recognize the accomplishments of those championship teams.

In 1970, the NMAA adjusted classification lettering from Class B, A and AA to Classes AA through AAAA.

In the Class AA Division, Coach Jack Carver and his Dora Coyotes fashioned a 24-6 record. Dora’s quarterfinal opponent was Tularosa. It took a 9-0 run in the final 3 minutes of the game to finally pull out the 59-44 win. Steve Luscombe was the scoring leader with 23 points. In the semifinal, the Coyotes overcame a 16-point halftime deficit to defeat the favored Elks 70-69.  With 14 seconds remaining, Steve Fraze hit the front end of a one-and-one. His second shot missed, but Stephen Richards was there for the rebound and putback to secure the win. Luscomb, once again, led with 30 points and Richards added 19. The championship opponent was Cimarron. The Coyotes picked up a 67-52 win. Richards led Dora with 21 points and 15 boards, Luscombe chipped in 11 points and 10 boards and Darquan Wall scored 11. 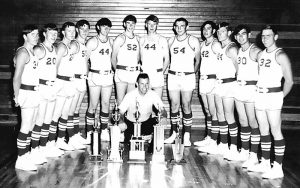 The Pirates of Grants compiled a record of 26-4 to become champions of the Class AAA division under head coach Ron Bohls. In the quarterfinals, the Pirates pulled away from Cobre in a 75-55 win. Leading the Pirates in scoring were Phil Allen with 18, and Manuel Manzanares and Ernie Whittington with 13 a piece. In the semifinals, Grants met up with Portales. Grants secured a spot in the championship with a 68-60 victory. Phil Allen led the Pirates in scoring and was followed by William Griego with 16 and Manuel Manzanares with 13. In the championship, the Pirates faced West Las Vegas, who was undefeated coming into the game. The Pirates captured their first school state title with a nail-biting 81-77 victory. A pair of William Griego free throws with 6 seconds remaining sealed the win. Jerry Hands and Phil Allen each scored 21 for the Pirates and Allen pulled down 14 boards. 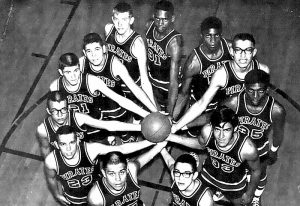 The 1970 Hobbs Eagles, the Class AAAA State Champions, were led by head coach Ralph Tasker and they posted a near-perfect 25-1 season. The Eagles were a pressing and scoring machine, averaging a record breaking and national leading 115 points per game during the season! The Eagles first round opponent was Mayfield High School. The Eagles advanced 72-56.  Semifinal opponent West Mesa was up next.  The Eagles press was on full display in a 98-63 win and 63% shooting for the game.  6’6” all-everything and University of Texasbound Larry Robinson led 6 players in double figures with 33 points. In the championship game, the Eagles faced the Albuquerque High Bulldogs and upstart coach Jim Hulsman.  The Eagles forced 27 turnovers and held a 68-42 rebounding edge in a contest in which the Eagles broke the state scoring record in a 123-87 win. Robinson fashioned one of the single best individual games in New Mexico basketball history with 40 points, 20 rebounds, 8 assists and 5 blocks. 6’8” center Larry Williams (who would attend Kansas State) added 26 points and 16 boards and Robert Brooks chipped in 24 points for the record setting Eagles, arguably the best team to every compete in New Mexico High School basketball. 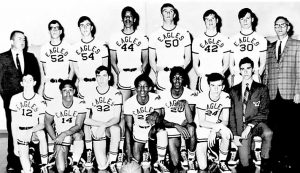 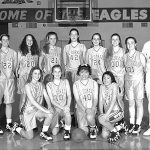 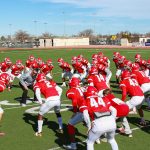