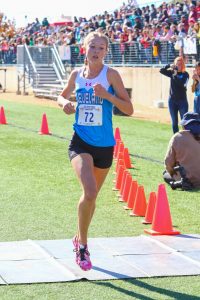 The 5-foot-9 freshman won the Class 5A state meet title this past season with a time of 18:26.45, breaking the tape 19.2 seconds ahead of her next-closest competitor and leading the Storm to a third-place finish as a team. Futey, who finished second at the 5A state meet as an eighth-grader, also won the Albuquerque Metro Championships and finished second at the Rio Rancho Jamboree in 2019. She was ill during the Nike Cross Nationals Southwest Regional championships, but still mustered an 80th-place finish.

Futey, whose sister has special needs, has volunteered locally on behalf of the Special Olympics. She has also donated her time at USA Track and Field events and on behalf of multiple community service initiatives through her church youth group. “Leah is without question a very talented runner,” said Kenny Henry, head coach of Cleveland High. “However, her ability pales in comparison to her work ethic. Leah is the hardest-working person on our entire team. She never shies away from a training session, even in the weight room.”

Futey has maintained a 3.6 GPA in the classroom. She will begin her sophomore year of high school this fall.

As a part of Gatorade’s cause marketing platform “Play it Forward,” Futey has the opportunity to award a $1,000 grant to a local or national youth sports organization of her choosing. She is also eligible to submit an essay to win one of twelve $10,000 spotlight grants for the organization of choice, which will be announced throughout the year.