This week marks the return to the Land of Enchantment for a couple former New Mexico high school standouts.  Jordan Byrd and Keshawn Banks will suit up for San Diego State as the Aztecs take on Central Michigan on December 21st at the New Mexico Bowl.  Byrd was a star athlete at Manzano High School and Banks was a highly recruited defensive end from Rio Rancho High School.  Both are currently sophomores at San Diego State.

The two players have known each other and played against one another in New Mexico since the age of seven.  Now they wear the same uniform with the Aztecs.  “Being on the same team is a blessing,” said Byrd.  “It’s good to have someone you know on the same team.”

Both players are expected to have several family and friends in the stands watching on Saturday.  “There’s a lot of college athletes who go off to college and they don’t get to see their family in the stands when they play games so it’s cool and nice and a great opportunity to have all my family and friends and everybody who’s been there for me in my life to come out and support,” said Banks.

At Rio Rancho High School, Banks was a three-year letter winner and helped lead the Rams to a 13-0 record and state championship in 2016.  According to MaxPreps, Banks recorded 133 tackles during his three years with the Rams, including 37 tackles for loss, 18 sacks, three fumble recoveries and one interception.  He eventually chose the Aztecs over Colorado State, Wyoming, UNLV, New Mexico and New Mexico State.

At Manzano High School, Byrd played three years of varsity football with the Monarchs.  He led Manzano to their first ever state football championship in 2017.  Byrd played quarterback, running back and receiver in high school and also returned kicks and punts.  During his high school career, Byrd rushed for over 2700 yards and 37 touchdowns, along with throwing another 16 touchdown passes and receiving four touchdowns.  On top of his football accolades, Byrd won four straight 100m state titles on the track and three 200m championships.

Out of high school, Byrd was heavily recruited by several programs, including TCU, Arizona, Texas Tech, New Mexico, Utah and Utah State.  He says his most memorable game in high school was the state championship in his final year with the Monarchs.  “It was a close game, 14-7,” Byrd recalled.  “Playing with my brothers was really nice, my senior game, it was really good.”

Banks also looks back on his state championship experience with the Rams as one of his high school highlights.  “The thing I took away from that is adversity,” said Banks.  “If I remember correctly, we were down and in the second half we came back and played.  You’re going to face adversity in life and you’ve got to get through it.”

Both won championships in high school and both are getting plenty of reps with the Aztecs.

In his freshman year at San Diego State, Banks played 193 snaps, the most by an Aztec true freshman on either side of the ball.  This year, Banks has played in all 12 games with 41 total tackles (19 solo) and four-and-a-half sacks.

In his freshman year with the Aztecs, Byrd recorded a 72-yard touchdown run at Boise State on just his fourth career rushing attempt.  He shared the team’s outstanding freshman award with cornerback Darren Hall.  This season, Byrd has played in 11 games and rushed for over 200 yards.

“I tell the kids in New Mexico that anybody can do it,” said Byrd.  “You just have to put your mind to it and it can happen.”

Banks agrees with his current teammate.  “If I could tell every New Mexico athlete who aspires to be a college athlete, I would tell you to keep going and don’t stop working,” said Banks.  “You might be overlooked because of where you’re from or your location and circumstances you have in life, but you’ve got to keep going and you’ll find a way.”

The New Mexico Bowl also marks the return to New Mexico for former La Cueva standout Zach Arnett who is currently an assistant coach at San Diego State.  Arnett is in his second year as the defensive coordinator with the Aztecs and has coached the linebackers for the past six seasons.

Arnett played both football and baseball at La Cueva.  He was a two-time all-state pick at linebacker and a three-time selection at catcher.  He originally signed to play baseball at the University of New Mexico out of high school, but was given a football scholarship before the start of his freshman season. 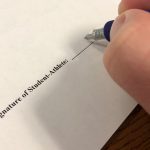 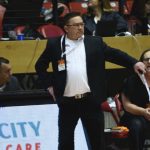