Tierra Encantada is one of the top boys soccer teams in the state this year, but many people don’t know who they are or where they’re located.

The Santa Fe school only has about 300 students.  Their mascot is the Alacrane.  Now I know you’re asking, what’s an Alacrane?  The players get asked that a lot.  “Yeah, we do, a lot,” said senior Jose Ruiz.  “What’s TECS? And then we have to spell it out for them, Tierra Encantada Charter School.

The Alacranes are planting their flag on the soccer map.  You’d be hard pressed to find a program that’s come so far in such a short time. “Last year, we had flat balls that we had to play with and we didn’t have a field,” said senior Jose Pichardo.  In fact, they often practiced on concrete. “When we first started we had one ball that would go flat after two hours of playing and then we’d be on small pavement,” said head coach Kurtis Montoya.

They’ve only been a varsity program for four years.  The first year they missed state.  The following year they lost in the first round.  Last year they advanced to the semifinals. “We saw a bunch of seniors that played a big part of it leave and it seemed like we didn’t miss a beat,” said Montoya.  “These seniors and juniors took leadership.  A lot of the kids that made that run and played against Sandia Prep were like ‘I want more and we want more.’  As much as we wished we could have beaten Sandia Prep, we learned a big lesson last year and we’re really excited to progress from that.”

Their success translates into more kids coming out for the program. “Last year they made it to semifinals and I thought they were pretty good,” said 8th grader Adolfo Diaz.  “So, I said ‘let’s give it a chance.’”

“We see ourselves in the top teams of New Mexico and it shows our improvement of how far we want to get,” said Pichardo.

Coach would love to see his team take the next step and advance to the state final.  The Tierra Encantada Alacrances, now you know who they are and the rest of the soccer world is also beginning to take notice. 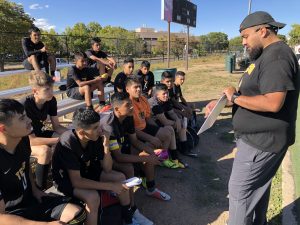 The seeding and selection show for the 2019 Fuddruckers State Soccer Championships will be Sunday October 27 at approximately 5pm on the NMAA website.