Albuquerque, N.M. – The New Mexico Activities Association Distinguished Service Award is given annually at the NMAA & NMADA Fall Leadership Conference.  The individuals receiving this award have all contributed significantly toward the good of the Association in one form or another.  Each recipient has supported interscholastic activities for numerous years.  The 2019 honorees are Debbie Coffman, Mark Geiger, and Dana Lehner.

Debbie Coffman started her career in high school and middle school athletics in New Mexico in 1976 at the New Mexico Activities Association. For the NMAA, Debbie’s main responsibility was working with the Director of Officials. She also worked side-by-side with then Executive Director, James Odle. Then in 1986, Debbie took a position with Albuquerque Academy as Assistant Athletic Director, a position she held for 33 years. While at Albuquerque Academy, Debbie was instrumental in starting their middle school sports programs. She served on the NMAA Commission as the Middle School Representative from 2014-2019. Debbie also served as the Chairperson for the NMAA’s Middle School Committee.

Mark Geiger has been practicing law in the areas of civil litigation and appeals involving sports law, business law, medical malpractice, and personal injury law since 1991. He has been a member of the bar of the U.S. Supreme Court since 1995, and he is licensed to practice in the Ninth and Tenth Circuits of the U.S. Court of Appeals, and the state and federal courts of New Mexico.  He is a member of the New Mexico Trial Lawyers Association and the New Mexico Medical Review Commission. Mark has represented the New Mexico Activities Association in state and federal courts, to include the U.S. Supreme Court, the Tenth Circuit Court of Appeals, and the New Mexico Supreme Court, since 1995, on matters ranging from student-athlete eligibility and school classification, ADA and Title IX, to concussion litigation and issues related to athletic participation.

Dana Lehner is the Executive Director of the Sun Country Golf House, which is comprised of golf’s governing bodies for amateur, professional and junior golf in the region of New Mexico and West Texas.  Dana has worked in athletics his whole life as a golf professional, media member, marketing events and he also coached football in Albuquerque.  The remarkable team at the Sun Country Golf House has been directly involved with the NMAA’s State Golf Championships for over two decades, helping that event become one of the best state golf competitions in the nation.  Dana and the Sun Country Golf House were also instrumental in helping develop a pace of play video for junior golfers.  With their dedication to the game and hours of assistance, Dana has made the sport of golf better and stronger than it has ever been in the state of New Mexico.

Debbie, Mark, and Dana were all recognized with commemorative plaques during the NMAA & NMADA Fall Leadership Conference Lunch Banquet that was held on September 30th.  Their service to the NMAA and the youth of New Mexico is greatly appreciated. 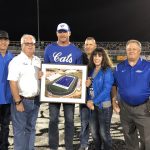