“Schools have something for everyone” as new year begins; A look at participation numbers across the nation

Welcome to another year of educational opportunities through high school sports and other activity programs in our nation’s schools. These programs provide many teachable moments not available in the classroom, and we look forward to making an impact on the more than 12 million young people involved in these vital activities.

Many states opened their high school football seasons last week, and a majority of the others begin this Friday. Thousands of other high school students will be involved in volleyball, cross country, field hockey, soccer and other sports this fall. And then there are those boys and girls involved in speech, debate, music and other cocurricular activity programs.

The NFHS distributed its most anticipated news release of the year earlier this week – the Annual Sports Participation Survey. The number of boys and girls involved in high school sports has been spiraling upward annually since 1988 – an amazing 29 consecutive years. However, due to several factors, the 2018-19 figure dipped to 7,937,491, which is the third-highest total in the 50-year history of the survey.

We have been aware for some time that the number of kids involved in youth sports has been declining. In addition, a decline in the number of public school students has been predicted for a number of years, so there simply may be fewer students in schools.

Understandably, the focus will be on the sport of football. While there were no states with significant drops in boys 11-player football, most states reported slight declines, which amounted to 30,000 participants nationally. However, a comparison of the figures from the past two years indicates that the average number of boys involved in 11-player football on a per-school basis dropped from 73 to 70, which would include freshman, junior varsity and varsity teams.

The survey confirmed that schools are not dropping the sport of football, which is great news. We continue to work with our state associations and groups such as USA Football to reduce contact and teach proper tackling skills at the youth level to increase the interest level as kids reach junior high school and high school.

While we hope that the numbers will return in football, we are pleased with the continued growth in several other sports, including volleyball, soccer and lacrosse. Since 2012, participation in girls lacrosse and boys lacrosse has increased 19 percent with a combined 213,452 participants in 2018-19. Girls and boys soccer has gained 70,668 participants since 2012 (a nine percent increase) and now has a combined 853,182 participants.

Seemingly, schools have something for everyone as the survey indicated participation by high school students in 70 different sports, as well as numerous adapted and Unified sports for students with disabilities. Schools are providing opportunities in bowling, badminton, flag football, archery, Ultimate Frisbee, bass fishing, crew and many, many others.

Ultimately, the goal of the NFHS and its 51-member state associations is to ensure that all students have an opportunity to enjoy healthy participation, achievement and good sportsmanship in education-based activities. We are excited about these opportunities as another school year begins. 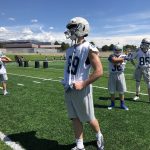