NEW BELEN COACH BRINGS TOUCH OF THE SOUTH TO THE NORTH

The Belen football program is under new leadership.  Ty House is the new head coach heading into the 2019 season.  House spent the past seven years as an assistant coach at Hobbs High School.

“We used to scrimmage Belen when I was in Hobbs and every time it was a dogfight,” said the 31-year old head coach.  “You knew the kids were tough, you knew they were in a winning program. So, when I saw this job come open, I knew maybe I didn’t have the experience needed, but I had to take a chance at it because, ultimately, this is what I wanted to do.”

“He’s bringing the same energy and a lot of the same pride as last year,” added senior linebacker Sefe Aragon. 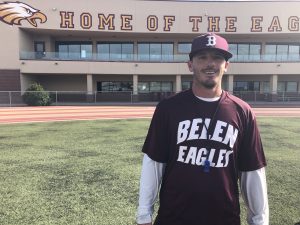 House replaces Greg Henington who left to join the football staff at Eldorado High School.  Over the past several years, Belen has relied heavily on the run.  House says they still plan to pound it out on the ground, but he is drawing from his southern football experience and adding a few more passing plays into his spread offense.

“As soon as I started applying for the job I started doing a lot of research on the kids,” House said. “I noticed that Luke Aragon was a junior last year and he put up some pretty good passing numbers, so that got me excited.”

House says he’s trying to build more than just a winning football team.  He is looking to build relationships that last longer than the season. 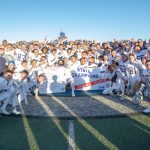 BEARS ARE BACK FOR ANOTHER RUNGeneral News, Press Releases 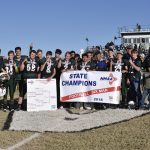