Onate High School sophomore Jaileen Mancha will be a name to remember in the coming seasons when it comes to softball.  The super sophomore is already one of the top pitching talents in the state.

She was a two-sport athlete with the Knights until a volleyball injury this past season prevented her from playing.  Mancha tore her ACL back in the fall just before the start of the volleyball season.  “It was the practice before our first game,” recalled Mancha.  “I just landed wrong and there goes my ACL. I was just talking to my friend and telling her that I’m never going to get hurt, that doesn’t happen. It was literally that practice when I was saying that and then it happened.”

She is back on the road to recovery and pitching again this season.  Being on the field is in her blood.  Her father, Tony Mancha, is a former professional baseball player from Las Cruces and currently coaches Jaileen.  “He pushes me to be the best,” said Jaileen.

As a pitcher, she’s more finesse than power.  “I have a lot of movement, so that helps a lot,” described Jaileen.  “I had more speed last year, but with the injury I’ve slowed down a lot.”

Jaileen isn’t 100% yet. She says she still battles through some pain because the injury happened to her leg she is used to pushing off with when she pitches.  Jaileen shutout Las Cruces this week with a 2-0 victory, only giving up one hit with 12 strikeouts.

She describes herself as not being very social, however she is very caring for others in the community. Jaileen wears a maroon ribbon in support of the Gadsden baseball community who lost Beto Romero, a baseball player killed recently when he was hit by a car.

“I didn’t know him, but it’s sad because he had a future that he didn’t get to experience like going to college or having a family,” she said in support of their community.  “He didn’t know it was going to be his last time on the field and it hurts, it’s hard.” 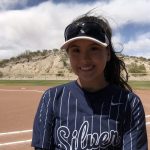