Last season Silver High School’s Kamryan Trujillo was one of the top softball pitchers in the state.  This year, she’s evolved into an even tougher matchup for batters.  “She’s dealing,” said Silver head coach Duane Trewern.  “She is doing everything outstanding.”

Trujillo is coming off a perfect game performance against Ruidoso.  Trujillo faced nine batters and struck out all of them en route to a 15-0 win. The senior has 135 strikeouts so far this season.  In 16 games, her ERA is 1.45 and she’s holding the opposition to a .161 batting average.  Of the 335 batters she faced this year, she’s only walked 12 of them.

Trujillo will be the first to tell you she is fortunate to have the same catcher over the years.  Ezzy Chavarria has been the one behind the plate for the whole ride.  “She’s been my catcher for six years,” said Trujillo.  “A lot of the strikeouts I have go to her. She’s a huge part of my stats.”

Trujillo committed to play softball at the University of Northern Colorado.  “Now that I’m preparing for college, I am trying to focus on the spin of the ball and hitting my spots,” she said.

Last year, Trujillo broke the school record for strikeouts with 264 Ks on the season.  Her coach appreciates having a front row seat to watch her throw.  “One of my biggest joys is after an inning I see her walking back to the dugout smiling and she says, ‘That curveball is snapping really nice.’  I anticipate nothing but continued success for her,” Trewern said.

Silver won a state title each of the past eight seasons.  This year they are in a classification with some tougher competition like Artesia, Los Lunas and Aztec.  “We wanted an even bigger challenge at state and we’re getting what we asked for,” said Trujillo.

Trujillo and Silver (13-3) will take the field Tuesday against Chaparral. 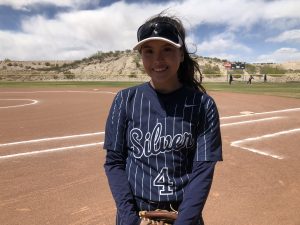 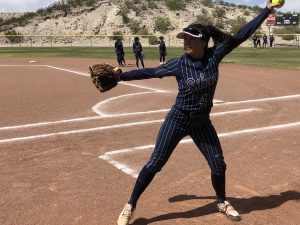 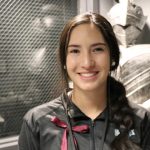