The Farmington girls basketball team underwent a makeover during the offseason and it’s translated into more wins this year.

“It’s been a really good year,” said senior Jordan Vasquez.  “There have been some very good, competitive games that we’ve come out on top.”

Larenson Henderson took over the program and the team racked up 20 wins so far this year.

“He puts the fundamentals in us and tells us to involve our teammates and move the ball quicker and faster,” said freshman Kiiyani Anitielu.  “Basketball is a team sport, he always brings up.”

Henderson spent six years in charge at Shiprock High School.  He reached the state final three times over a four-year span, winning it all in 2017. But the school cut ties with Henderson, opening the door for Farmington to land him.

“I always loved Farmington High School, I always wanted to go to school here,” he explained.  “It’s kind of strange how I ended up here.  I love green.”

And green loves him.  He looks at this job as an opportunity for a bigger challenge.

“As a coach, you always tell your players that you have to go along with what the world gives you at times.  You can do the best you can, but if elsewhere is going to provide a step up then you should pursue it.”

With a new head coach, Farmington will pursue a blue trophy in the coming years. 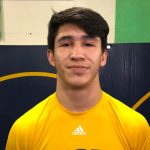