“It was a little overwhelming,” said Dorame.  Dorame first started coaching in New Mexico in 1985-86 at Cibola High School.  He started his overall coaching career in Broomfield, CO as the track and cross country coach in 1981-82.

“I’ve been fortunate to work at both Cibola and Albuquerque High Schools.  I consider them to be the two best schools in APS. I’ve had great principals who always supported me.  I want to especially thank Linda Cink.  When she moved from Cibola to AHS as principal, she brought me with her.  She knew my daughter Dinee was going to attend AHS.  Then Tim McCorkle gave me the opportunity to be Athletic Director at Bulldog City.  It’s been fun.  The best part was the opportunity to coach my daughter (’08-’11) at AHS.  Dinee graduated from Yale in 2015.  My last daughter is a sophomore at AHS.”

Here are some other high school basketball scores from Wednesday night. 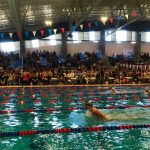