RAMS HEAD TO PHOENIX ON A WINNING NOTE

The Rio Rancho volleyball team improved to 5-2 overall with their second straight 3-0 sweep over Eldorado on Tuesday.  Next up for the Rams is a trip to Phoenix for the Nike Tournament of Champions.

“It’s really nice to have a senior group for a change,” said head coach Toby Manzanares.  The Rams have 7 seniors on this year’s roster.  “I just think we’ve gotten to a point where maturity has come into fruition and some senior leadership on the floor has really helped.  It’s been a waiting game.

Next up for the Rams is a trip to Phoenix for the Nike Tournament of Champions. The field is comprised of three 32 team tournaments going on in the Phoenix area.  The Rams are in a pool with teams from Alaska, southern California and Scottsdale (AZ).

“It’s nice to see someone outside our state,” added Manzanares.  “We see teams in our area multiple times.  We’ve already played La Cueva and Eldorado twice.  It’s nice to get on the road and gauge ourselves against some different talent.”

As for New Mexico, Manzanares thinks La Cueva is the team to beat in the state’s largest classification.  “They’ve got a lot of returners and some really athletic hitters and one of the best setters in the state.”

“Las Cruces High is really good,” added Manzanares.  “Sandia, even though they graduated a lot of kids, is really good.  Cibola is up and coming. We’ve got a good team. Centennial is a little younger than they used to be.”

The Rams leave for Arizona on Thursday with their first matches on Friday. 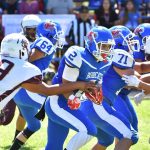