SUNDEVILS LOOKING FOR 4 IN A ROW

“That’s crazy to think about that it could happen,” said senior Julia Tipton.  “We just really have to train a lot throughout the year. It’s a dream every year (to win state), so hopefully that dream comes true.”

“Obviously it puts the biggest target on our back, but it just makes us want to work harder,” said senior Emma Kier.  “Especially because we lost a lot of those players and we need to pick up the slack and try and do what they did.”

Last year’s title run was led by a senior heavy squad.  Now the duties fall on the juniors and seniors who sat on the bench last season.

“It’s rough having to sit the bench and you want to support your team, but it still gets frustrating,” explained Kier.  “So now those people have their chance and they’ve been working really hard and I know they’ll do great.”

“We need whole new leadership, new captains, new everything, so we gotta figure out who’s going to be that leader,” said head coach Audra Gentry.

Sandia Prep is also playing in a new district and new 3A classification this season.  The Sundevils are no longer in the same class with the likes of Hope, Pojoaque and Portales.

“I don’t know if it will make it more challenging but definitely different,” said Kier.  “We’ll be playing some teams we haven’t seen yet and it will maybe be a different type of play but I think we can adjust.”

“I think there’s going to be a battle between us and Robertson because we’ve been in the finals together quite a few years,” said Gentry.  “I think Robertson has a target this year because they have a lot of seniors and I think we’re kind of the underdog this year, which is kind of fun.”

The fun starts for Sandia Prep August 29th when they open the season against Pojoaque. 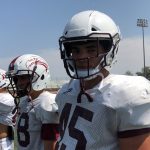