The Eldorado girls soccer team opened up the season with a 3-1 victory over the Cleveland Storm.

“Cleveland is a very strong team who has caused us problems in the past, so to get a convincing win against them speaks to the effort our players put in on the field,” said Eagles head coach Andrew Wiese.

Wiese is in his third season with the Eagles.  Eldorado lost to Cleveland in the 6A quarterfinals last year.  He says this year’s Eldorado team is young with several freshman and sophomores, but will be led by their two senior captains.

“Our captains, Hannah Dahl and Sophia Roberts, are the two hardest working players on the team and they have a vision for how they want the season to go.”

Next up for Eldorado is a Thursday matchup against Highland.

Here are some other Tuesday scores from the Metro Championships: 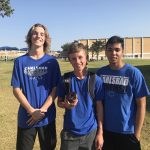