Belen baseball is having one of their best seasons in years.

“A lot of us have been starting since we’re sophomores so we just feel like we have that experience and it’s just been a great year,” said senior Thomas Wisneski.

“It’s been a great year,” said senior Carlos Espinoza.  “I’ve played with these guys my whole life and I can say honestly it’s probably the most fun year of baseball I’ve had.”

Belen racked up 20 wins so far and earned a four seed in the playoffs.  The Eagles will host a postseason game for the first time in at least six years.

“All the hard work we put in this year was meant for something and that means getting a home playoff series and getting to play in front of the fans in Belen,” said head coach Tom Wisneski.  “We put a lot of people in the seats when we’re winning.”

“It would be great to get the community of Belen to the second and third (rounds) and then eventually to Isotopes Park, it would be a great showing,” said Thomas Wisneski.

“We come from a small town and small community but football, basketball and now baseball we pack the stands and seeing us all come together for a greater cause it’s awesome,” said Espinoza. 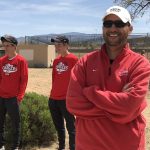