The 6-foot junior outside hitter amassed 586 kills and 144 digs this past season, leading the Hawks (23-3) to the Class 5A state semifinals. Fuqua also tallied 49 service aces and 39 blocks while posting a .546 kill percentage and a .415 hitting percentage. The 2021 Class 5A Player of the Year, she is a two-time First Team All-State selection.

An aspiring medical professional, Fuqua participated in a six-week internship at the Burrell College of Osteopathic Medicine in Las Cruces last summer. She has volunteered locally with Best Buddies International and as an English Language Learners tutor. “Tess has been a dominant player in New Mexico volleyball since she was a freshman and especially in the last two years,” said Al Rosen, head coach of Centennial High School. “She has grown not only as a player but as a leader and a captain as well.”

Fuqua has maintained a weighted 3.71 GPA in the classroom. She has made a verbal commitment to play volleyball on scholarship at the University of Arizona beginning in the fall of 2023. 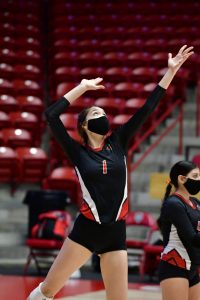 Gatorade has a long-standing history of serving athlete communities and understands how sports instill valuable lifelong skills on and off the field. Through Gatorade’s “Play it Forward” platform, Fuqua has the opportunity to award a $1,000 grant to a local or national organization of their choosing that helps young athletes realize the benefits of playing sports. Fuqua is also eligible to submit a short video explaining why the organization they chose is deserving of one of twelve $10,000 spotlight grants, which will be announced throughout the year. To date, Gatorade Player of the Year winners’ grants have totaled more than $3.5 million across more than 1,300 organizations.