New Mexico Activities Association Executive Director Sally Marquez answers questions about the return to athletics and activities for the 2020-2021 school year.  Here is this week’s interview.

You’ve talked recently with football coaches and athletic directors about the start of the football season.  What sort of feedback are you getting?  Has the scheduled start date officially been moved back?

We had a football coaches meeting last week and we wanted to gather some input from the coaches.  Overwhelmingly, the coaches just want to try and play football this year and that’s the goal.  The goal is to try and play all sports in the 2020-2021 school year.  February first is the date we have on the calendar, but we’re getting close and we have not heard anything from the governor’s office.  So, we are going to go to the NMAA Board of Directors on Wednesday, we are going to have an emergency meeting, and probably push that date back to mid-February to give those football players and coaches a chance to get in shape and get ready for the season.

You said it’s been moved back, can it be moved anymore?

We’re almost at the end.  We are trying so hard to make sure we have all sports.  To overlap all of them is really tough.  The more we push it back, the shorter the season is.  We are hopeful mid-February will work, but right now we are talking about half of a season.  We are talking about five or six games.  But the goal is to get those kids back on the football field and even if it’s a small season, let’s have something meaningful for them.

Why can’t you move sports or seasons with one being played the same time as others?

When you ask that question, a lot of people think about the big schools.  The big schools have enough athletes where they can play one sport and play another on top of each other, but there is so much more to it.  We have to look at smaller schools, and I’m not even saying Class A and AA, even our 4A schools need to have multiple athletes in order to make sure all sports work.  Beyond the athletes, we have to consider facilities.  How do you put one sport on top of each other?  How do we have volleyball and basketball going at the same time when we’re having games and practices at all levels?  At some times, you’re talking six teams in a gym, plus games in order to get their season played.  Then you have to look at transportation, you’re talking about buses.  How do we get all these kids and all these kids playing at the same time?  We don’t know if we have enough transportation.  There’s so much more to it than ‘hey, let’s just play all sports’, we have to look at the outside as well.

The NMAA is making an effort to help students financially during these tough times.  What is the NMAA Foundation doing?

Is the NMAA considering playing varsity sports only?

We had an athletic directors meeting and that was a topic.  Right now, we’re looking at all levels.  Where the ‘varsity only’ talk came in is when we were discussing putting sports on top of each other.  I just explained about the gym use and having six teams, if we had to put sports on top of each other, we may forgo middle schools or other sub-varsity games, but at this time we are not even thinking that way.  We are thinking all kids need to be on the field whether they are middle school or C-team, JV or varsity, all kids need to be able to participate and that’s our goal at this time.

Will there be state championships for every sport that is able to start?

At this time, we’re trying.  There are some sports where that is easy to do.  Cross country, for example, you can have one meet and then a state champion. With some sports like volleyball and basketball, we can play a Monday-Wednesday-Friday or Tuesday-Thursday-Saturday schedule to get a quarterfinal, semifinal, final in.  Our problem right now is football because you can’t play multiple football games in one week.  So, how do we get a culminating event for football with only being able to play on a Friday or Saturday and then the following week.  We are still working at that to see if we are going to be able to do state championships in all sports.

Why not cancel fall and winter and focus only on spring sports?

With all athletes, you put your goal out there and ask yourself how do you reach that goal.  At this point, we have not been told ‘No’ yet for fall sports.  We haven’t been told no or you have to start April 1.  We are waiting for that go-ahead still.  The goal is still to play all sports.  A lot of people ask, ‘Why don’t you cancel fall and winter sports and just concentrate on spring sports?’  We are concentrating on the spring, but it is too early to cancel those fall and winter sports at this time.

Lastly, students are anxious, parents are frustrated. If you had a student athlete or a parent sitting here one on one, what would you tell them?

That’s tough because I was a parent of an athlete.  What I’ve been saying in all these messages is to be positive, but parents and athletes get frustrated and they are trying to figure out if we’re going to play.  I think that’s the question they just want to know.  Are we going to play?  Just like athletes set a goal in sports, there can be some hills that you’re going to have to climb and some bumps in the road, we have a big bump in the road right now, but that doesn’t mean that we give up.  Just like those athletes trying to attain a goal, if they have an injury they’re out of commission for a while, I kind of equate it to that.  We are out of commission right now, but that doesn’t stop for our goal.  Our goal remains to play every single sport in the 2020-2021 school year.  What I would tell every athlete and every parent, I know it’s frustrating but we cannot stop now.  We have to keep up the fight, we have to keep the faith, and we have to keep going until we’re told No.  When we’re told no, or if we’re told no, then we will adjust that goal.  But right now, the goal is the same, let’s stay positive, let’s stay on the course and we’re going to play sports again in New Mexico. 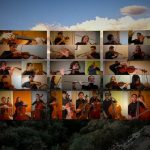