The 5-foot-8 junior won the 100-meter dash at the Los Lunas Invitational in her only outdoor meet of 2020, continuing the momentum of an indoor season when she clocked a personal-best time of 7.60 seconds in the 60-meter dash at the Great Southwest Classic Invitational. That ranked as the nation’s No. 49 time among indoor prep competitors in 2020. At the 2019 5A state meet, she swept the outdoor 100- and 200-meter dash events while also running legs for the winning 4×100 and 4×200 relay quartets to help the Matadors place second as a team. Her personal-best 100 dash clocking of 11.58 seconds, which earned her fourth at the Great Southwest Classic Elite Finals, ranked No. 22 nationally among 2019 prep competitors in the event. Running the final leg for the 4×100 and 4×200 foursomes a year ago, Tatum helped both squads set state records. The No. 44 recruit in the Class of 2021 as rated by MileSplit, she is a seven-time state champion across multiple track events.

A multi-sport athlete who helped Sandia to the 5A volleyball state final in 2018, Tatum helps organize, officiate and manage clean-up efforts at middle school school meets and has served as a volunteer youth coach. A devotee to the art of ceramics, she has also donated her time as a peer tutor and has assisted in charitable donation drives for the Special Olympics, the National Bail Out fund and anti-racism social activism. “In only two seasons, Adriana has established herself as one of the greatest sprinters in New Mexico’s history,” said Jaren Brooks, editor of New Mexico Milesplit. “She claimed the 100- and 200-meter individual state titles in addition to her role in two 5A relay state championships in 2019. She also holds the state record for the girls 100. In her sophomore year, Tatum went undefeated through the indoor state championships, capping it off by winning the 100 and 200 state titles.”

Tatum has maintained a weighted 4.2 GPA in the classroom. She will begin her senior year of high school this fall. 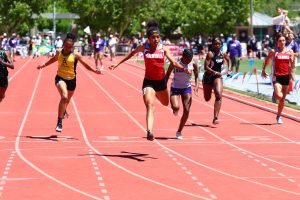 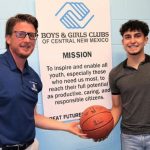