INDIANAPOLIS, IN (March 16, 2020) — Tyler Jenson & Max McGaha, students at La Cueva High School in Albuquerque (NM), have been selected as the 2020 Section 6 recipients of the “National High School Spirit of Sport Award” by the National Federation of State High School Associations (NFHS).

The National High School Spirit of Sport Award was created by the NFHS to recognize those individuals who exemplify the ideals of the spirit of sport that represent the core mission of education-based athletics.

Tyler and Max were involved in two different sports in two different parts of the state, but were joined together by a potentially deadly diagnosis.  Tyler is a football player and track athlete at La Cueva High School.  Just 18 months ago, he noticed a little bump underneath his arm that changed his life.  Over 150 miles away in Farmington, a 15-year old baseball player at Piedra Vista High School named Max McGaha would have his own medical emergency.  Both would be diagnosed with different forms of cancer that would not only end their seasons as athletes, but would also threaten their lives.

Tyler and Max had never met, but their paths crossed at a hospital in Albuquerque.  “I saw him walking around when I was diagnosed, I met him and we played video games,” said Max.  “We’d be in different hospital rooms, but we’d be playing together on Fortnite or something like that,” said Tyler.  “Even when we were at home in between treatments we were playing video games”.  Tyler and Max were now teammates in the battle against cancer and both had the drive and will to get better.  No matter the condition or physical toll it took, neither athlete was going to let their disease win.

It is now a year and a half after the original diagnosis – Tyler played football in the fall and is part of the Track team this spring, while Max is now a member of La Cueva’s baseball team after he and his family moved to Albuquerque last year – so not only are both boys beating cancer together, but they are classmates as well.

The NFHS divides the nation into eight geographical sections. The states in Section 6 are New Mexico, Arkansas, Colorado, Oklahoma and Texas.

Nominations for this award were generated through NFHS member state associations and reviewed by the NFHS Spirit of Sport Award Selection Committee composed of state association staff members.

While the national winner will be recognized June 29 at the NFHS Summer Meeting in Chicago, Illinois, the section winners will be recognized within their respective states and will receive awards before the end of the current school year.

About the National Federation of State High School Associations (NFHS)

The NFHS, based in Indianapolis, Indiana, is the national leadership organization for high school sports and fine arts activities. Since 1920, the NFHS has led the development of education-based interscholastic sports and fine arts activities that help students succeed in their lives. The NFHS sets direction for the future by building awareness and support, improving the participation experience, establishing consistent standards and rules for competition, and helping those who oversee high school sports and activities. The NFHS writes playing rules for 17 sports for boys and girls at the high school level. Through its 50 member state associations and the District of Columbia, the NFHS reaches more than 19,000 high schools and 11 million participants in high school activity programs, including more than 7.9 million in high school sports. As the recognized national authority on interscholastic activity programs, the NFHS conducts national meetings; sanctions interstate events; produces publications for high school coaches, officials and athletic directors; sponsors professional organizations for high school coaches, officials, spirit coaches, speech and debate coaches and music adjudicators; serves as the national source for interscholastic coach training; and serves as a national information resource of interscholastic athletics and activities. For more information, visit the NFHS website at www.nfhs.org. 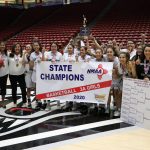 PLAYERS & COACHES ARE THANKFUL FOR THE OPPORTUNITY TO PLAYGeneral News, Press Releases