Two years ago, the Piedra Vista girls basketball team finished with 23 wins.  Last year it was 26 and a Final Four appearance in the state tournament. This year they’re trying to top that with their first ever state title.

“Mostly everyone from last year came back so we definitely want to redeem what we did last year and get that blue trophy,” said sophomore Lanae Billy.

“Everyone has the same goal right now and that’s state,” said junior Celina Watson.  “So, everyone is really determined to hold up that blue trophy.”

Lanae Billy is their leading scorer.  She reached the 1,000-point plateau for her career earlier this season and she’s only a sophomore. “And the good thing about it is she’s a very unselfish player,” said her coach.  “She averages about 4 assists a game and plays both ends of the court.  She’s one of the smartest basketball players I’ve seen in a long time.”

Lanae’s mom was a state champ herself at Shiprock High School.  “It would be really great to do what my mom did and follow her footsteps,” said Billy.

The Panthers also get plenty of production from the Watson sisters Elaina and Celina.

“Definitely competitive, it’s really fun,” said the younger Celina.  “I feel like I know exactly where she is on the court and it really helps me as a player.”

Elaina Watson committed to play at Adams State and she says a mid-season loss helped get the previously unbeaten Panthers back on track.

“When we lost to Sandia, that released all the pressure off us,” said the senior.  “But now we’re going strong.”

“We had that target on our back for a long time this year,” said Reed.  “We had that loss at Sandia and it kind of woke us up a little bit.  It was a good loss.  Our practices have been better.  I don’t think there’s any pressure, pressure is man-made.  Just go out there, do your job, have fun and the results will take care of itself.”

We will see what kind of results the Panthers end up with in mid-March. 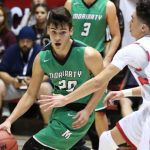