Hatch, New Mexico is known for hot temperatures as well as chile.  Recently their girls soccer program is starting to heat up.

Hatch Valley has never won a girls state soccer championship, in fact, they’ve never reached the title game. But right now they have one of the best records in the state.

“I’m feeling it, I feel like this is the year,” said senior Sheyla Gutierrez.

This group is fairly young.  There are only three seniors on this year’s roster.  They hope to build something for the players behind them.

“I think a lot of it is just passing down your knowledge to the younger people because after this year it’s their team,” said senior Tavyn Trujillo.  “This is our last chapter but they still have their whole story to build.”

“I try to encourage them during the games telling them to keep on so they won’t get tired,” added Gutierrez.

They’ve qualified for state each of the past three years behind head coach Arturo Bustillos.

“It’s a good yelling though,” said Gutierrez.  “He encourages us during the games.”

So, what would it mean to finally win that blue trophy?

“It would mean a lot, it’s making history,” said their head coach.  “Every year we try keep improving one step at a time, making history, something new.”

“It would be the best, honestly,” said Gutierrez.  “We’ve been trying to get there ever since my eighth grade year, that was our first time going to state.”

These girls hope their game is as hot as their well-known home town product when November rolls around. 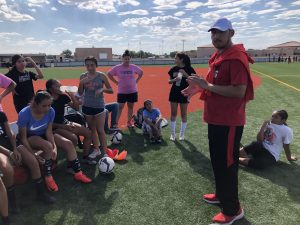 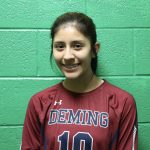