Kallie Coombs, a junior film student at Centennial High School, has been selected to screen two of her short films, “DIVEtheBand” and “Jeremy Marilyn” at the 2019 All American High School Film Festival in New York City.  The festival will take place at the Times Square AMC Theater on October 12-13.

“I can’t wait,” said Kallie.  “We are were really discouraged to make a film with the end of school, so starting the project this summer was really hard. It took us a long time to find our groove but once we found it, being on set was so fun. Everyone did an exceptional job in their department; I couldn’t have asked for a better team/family. Being able to create something and submit in just enough time for the festival and then being selected twice is crazy. I’m so excited to see where this take us. It’s going to be a great opportunity to meet new filmmakers and get recognition for all our hours spend on the projects.”

Both films are now eligible for awards during the festival.  “DIVEtheBand” will be shown in the DRAMA category.  “Jeremy Marilyn” is listed in the HORROR/SCI-FI/FANTASY division.  “DIVEtheBand” has a running time of just under eight minutes.  The story involves a guitarist named Julian who finds himself at odds with his musical group, DIVE the band. When his addictions get in the way of band practice, much more will be lost than just a rehearsal.  “Jeremy Marilyn” is also a seven-minute film about when a love seeking protagonist stumbles upon the ‘perfect’ date, risk overrules rest, revealing dark secrets kept within the house.

“Kallie is a dedicated, talented and motivated individual that I’m proud to have as a student,” said Centennial Film & Broadcast teacher Marissa Prentice. “I am thankful for all the help she received, the entire team was really great to give up so much time to work on both the projects. I’m excited about the Film Festival, it is something new that we had never submitted to, so to be selected for two films is amazing. This is a huge national recognition not only for my film program and Centennial High School, but also for our city and state.” 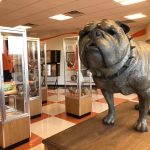 ARTESIA’S HALL OF CHAMPIONS IS A LOOK BACK AT FOOTBALL HISTORYGeneral News, Press Releases