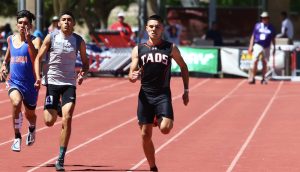 The 5-foot-8, 145-pound senior swept the 100-, 200- and 400-meter dash events at the 4A state meet, helping the Tigers to a fourth-place finish as a team. His winning time in the 100 was a personal-best 10.51 seconds, which ranked No. 34 in the nation among prep competitors in 2019 at the time of his selection. Vigil clocked another PR to capture silver in the 400 at the prestigious Great Southwest Classic, crossing the line in 46.43 to record the nation’s No. 4 time this spring. An eight-time individual event champion, he graduates as the state all-class record-holder in the 400.

An avid angler who enjoys camping and hiking, Vigil has volunteered locally on behalf of Taos Feeds Taos as well as the town’s First Responders Appreciation Luncheon. A student ambassador and student council participant at his school, he has also donated his time to High Altitude Athletics, a youth gymnastics program. “Jonah Vigil is plenty deserving of this recognition,” said Erik Boal, editor for Dyestat.com. “He PR’d by over a half-second in the 400 to finish second at Great Southwest. He’s won eight individual state titles and shared in four championship-winning relay quartets.”

Vigil has maintained a weighted 3.5 GPA in the classroom and has signed a national letter of intent to compete on an athletic scholarship at Adams State College in Alamosa, Colo., beginning this fall.

As a part of Gatorade’s cause marketing platform “Play it Forward,” Vigil also has the opportunity to award a $1,000 grant to a local or national youth sports organization of his choosing. He is also eligible to submit an essay to win one of twelve $10,000 spotlight grants for the organization of choice, which will be announced throughout the year. 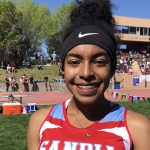