Some former New Mexico high school standouts will take the next step in their baseball careers.  A couple players from the Land of Enchantment were selected in the 2019 Major League Baseball Amateur Draft this week.

On Tuesday, former La Cueva High School graduate Andrew Pratt was taken in the 10thround by the Washington Nationals.  Pratt spent the past two seasons at Lubbock Christian after transferring from the University of New Mexico in 2017.  Last season Pratt hit .358 with 13 home runs and 54 RBIs.  He also led in his team in doubles each of the past two years.

Wednesday, former Los Alamos standout Jared Mang was drafted by the Detroit Tigers in the 18th round.  Last season at UNM Mang led the Lobos with a .365 batting average and 76 hits.  The outfielder led the team in home runs his junior year with 8.  In high school, Mang was a two-time Gatorade New Mexico Player of the Year.

Former La Cueva High School pitcher Jonathan Stroman was selected by the Arizona Diamondbacks in the 22nd round.  The right-hander pitched for Central Arizona College last season.  Stroman racked up 116 strikeouts in 79.1 innings of work.

Former Manzano High School pitcher Mitchell Parker was drafted by the Tampa Bay Rays in the 27thround.  The left-hander was 6-0 with 111 strikeouts and a 1.54 ERA at San Jacinto College. Parker was a 28thround pick by the Chicago Cubs in the 2018 MLB Draft.

The Tampa Bay Rays also selected Rio Rancho alum Zach Bravo in the 29th round.  The right-handed pitcher had 97 strikeouts in 80 innings of work at Butler County Community College in Kansas. 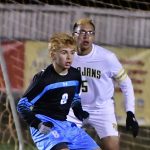