The 5-foot-9 senior forward led the Chargers to a 21-2 record and the Class 4A state championship this past season. Mariner recorded 62 goals and 14 assists, including one of each in the team’s 4-1 win over Hope Christian High in the state title game. A two-time Class 4A Player of the Year, Mariner is also a three-time First Team All-State selection. She concluded her prep soccer career with 155 goals and 25 assists.

A member of her school’s Student Diversity Leadership Club, Mariner has volunteered locally at an animal shelter called Watermelon Mountain Ranch. “Eliza made the difference for her team,” said Andrew Wiese, head coach of Eldorado High. “She has an incredible knack for scoring goals. I don’t think we’ll see production like that again for some time.”

Mariner has maintained a weighted 4.27 GPA in the classroom. She has made a verbal commitment to attend Cornell University, where she will play soccer, beginning this fall.

As a part of Gatorade’s cause marketing platform “Play it Forward,” Mariner also has the opportunity to award a $1,000 grant to a local or national youth sports organization of her choosing. She is also eligible to submit an essay to win one of twelve $10,000 spotlight grants for the organization of choice, which will be announced throughout the year. 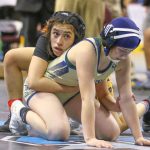